Dail Barbour was twenty-four-years-old when she moved to Jackson Hole. She worked at the Wort Hotel, a historic inn in the heart of the city, where she was issued a remarkable uniform.

Dail Barbour arrived in Wyoming the summer she graduated from high school, 1964. She and a few friends bicycled across the country. They spent a week in Yellowstone and Barbour swore she would return. Six years later, she moved to Teton County permanently, settling for some time in Wilson where she spent many days and nights at the legendary Stagecoach Bar.

During the years Dail Barbour served as Teton County commissioner, she kept her day job at the Stagecoach Grill, which was eventually purchased by local entrepreneur Nora Tygum. When Nora moved her business across the street to open the Fish Creek Inn—now a James Beard Award-winning restaurant—Barbour followed her. In this story, she recalls the difficulty in being both a politician and a townie. 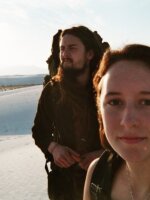 Adrian Shirk
Adrian Shirk is a writer and editor raised in Portland, Oregon. She holds a BFA in Writing for Publication, Performance, and Media from Pratt Institute in Brooklyn, and is a co-founder of The Corresponding Society, and its associated journal Correspondence. Her work has appeared in Wilder Quarterly, The Airship, Packet, Owl Eye Review, and 7Stops Magazine. She's currently an MFA candidate in creative nonfiction at the University of Wyoming. Left to her own devices, she writes about American religion, architecture, geography, the remains of fallen cities, and family ancestry.
See stories by Adrian Shirk
Newsletters
Stay connected with our weekly and monthly newsletters! Get the top stories in local and regional news, podcast updates, and much more straight to your inbox.
SIGN UP
Latest Stories
Related Content