Faces Behind The Fires: Fish Biologist

Fire experts say this season could be big for wildfires in our region. Our Mountain West New Bureau takes you behind the scenes with stories about the people who protect our communities, land and wildlife during wildlfire season.

This story is about the people who rush into the smoke not to save people or structures, but … animals.

If you have legs or wings you’re probably going to run or fly away from a wildfire. But it might not be that easy if you’re a fish.

That’s where Josh Nehring comes in.

Nehring is a second-generation aquatic biologist for Colorado Parks and Wildlife. Most of the time his job involves surveying native fish populations and improving stream habitat. Except when wildfire threatens those rare species he works to protect. Then he springs into superhero action. 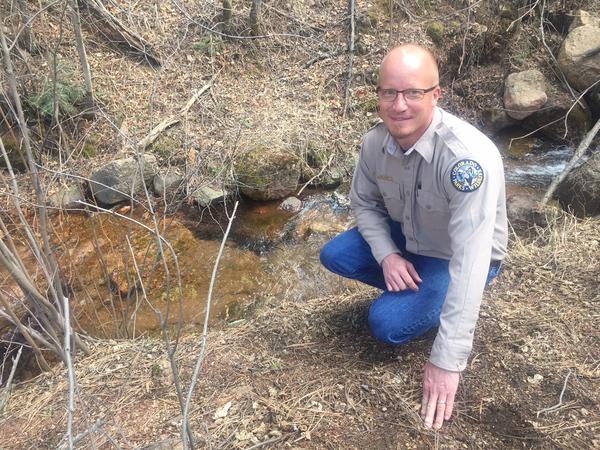 Nehring got a call from a fellow biologist that a nearby fire was picking up speed. And the fire was getting close to a waterway, the South Prong of Hayden Creek, which was home to an important strain of fish: the greenback cutthroat trout. 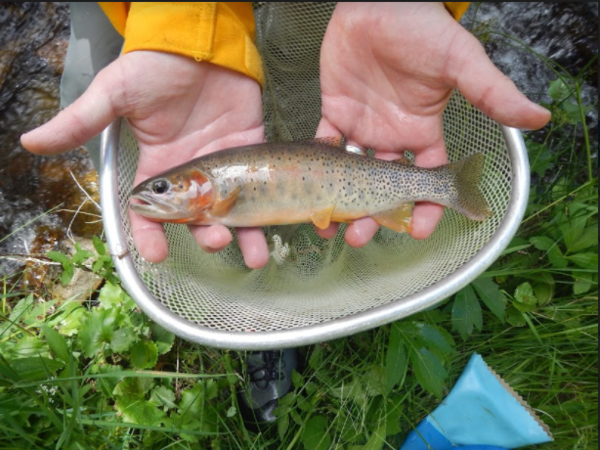 “It's a beautiful fish,” said Nehring. “It has dark spots along its body. The name cutthroat comes from the orange slashes that they have right under their chin.”

But this particular genetic variety of greenback cutthroat were only found living in this one stretch of this one creek. And they were in grave danger. Nehring had to move fast.

Now a quick aside here. You might be thinking: Fish live in water. Why do they have to worry about wildfires? Well, it’s not the fire that harm fish, it’s the byproduct: ash.

“The ash really changes the water quality,” Nehring said. “It’ll change the pH of the water specifically. And trout in particular have a pretty narrow tolerance for pH changes.”

And that’s not the only thing to worry about. Fire is often followed by rain. And on burned ground that can lead to floods. Floods can create muddy water and stir up sediment which, according to Nehring, “can just literally suffocate the fish.”

These potential dangers were on Nehring’s mind in 2016 as he made his way to Hayden Creek near Salida, Colorado. He knew he had to get some of the cutthroat trout out of the stream and into a hatchery. So if the rest perished, at least the genetic line would be saved. Still most of the 30 or so scientists on Nehring’s team had never been behind an active fire line.

They’d gotten safety training from the Forest Service, but, still, said Nehring, “it was a little nerve-wracking going in there and seeing smoke and smelling smoke. The helicopters were flying over and dropping water and so it was a little bit scary that way.”

Still they put on their waders and hiked to the creek with their dip nets, buckets, oxygen tanks and 40-pound electrofishing units. Nehring called them “backpack shockers” and said when you hoist them on your back, they look like ghostbuster outfits. 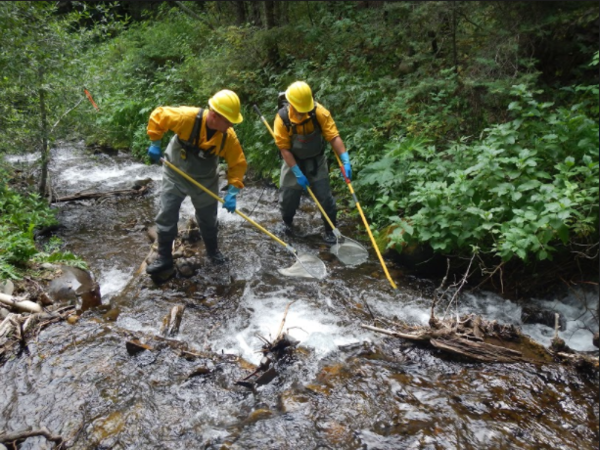 Long wands attached to the backpack put a mild current in the water to attract and then stun the fish. Then the biologists can dipnet them out, put them in buckets, carry them to a tank of water on the back of a truck and get them to a hatchery.

Two years after the 2016 fire, Nehring says the descendants of the cutthroat trout he and his team rescued are thriving in a local hatchery and waiting to be put back into a healthy creek. But the ones left behind all died.

“If we had not gone in there,” Nehring said, “we wouldn’t have preserved those genes and they’d be gone forever.” 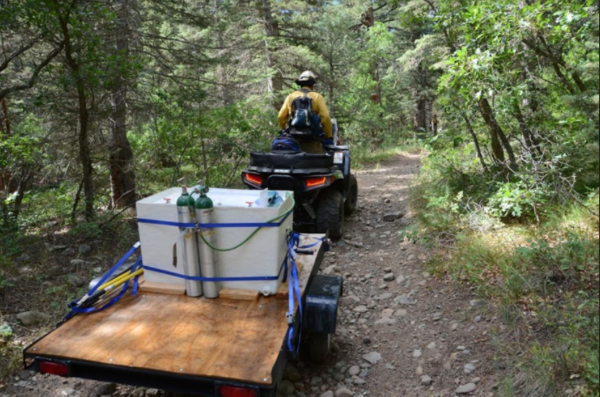 And that kind of vigilance is an ongoing job. Nehring’s got his eye on another rare strain of greenback cutthroat trout at Bear Creek just minutes from downtown Colorado Springs.

If that area burns, Nehring says, he’ll be ready to suit up and cross the fireline all over again.

Paddling down the Green River, Trout Unlimited project manager Nick Walrath has a fish tale for almost every bend of the Green River below the Fontenelle Dam in southwest Wyoming.

“I drive my wife crazy because I’m like, remember that fish you caught by that big tree?” Walrath says, rowing past the spot where he once made a brown trout “rise” from a patch of grass.

As we crossed into Seedskadee National Wildlife Refuge, we spot two young bald eagles perched on the bank, looking past us to the yellow bluffs.

Last week, President Trump signed an executive order to begin the process of eliminating a 2015 Clean Water Act rule known as the Waters of the United States that gave extra protections to smaller streams and wetlands.

Is Climate Change Pushing Pikas Up The Mountain?

There aren’t many critters crazy enough to live year round on mountaintops. So any that do live there have got to be tough. Like the American pika, an adorable little round-eared — and noisy — animal that lives in the rocks at the highest elevations.

But are pikas tough enough to survive a warming planet? University of Wyoming researcher Embere Hall is trying answer that question.

Yellowstone biologists are winning the war against invasive Lake Trout, and bringing back native Yellowstone Cutthroat.

Yellowstone Lake is a cold place. If you’re out on the lake even in the middle of the summer, you’ll need a jacket. So, when we went out in a boat with Yellowstone’s leader of the Cutthroat Trout restoration project, it was chilly.

Yellowstone Lake is the largest fresh water lake above 7000 feet in north America. It is also very deep, and cold. That is why non-native Lake Trout have thrived here. They evolved in the Great Lakes.