The WYOmericana Caravan Kicks Off Its Summer Tour In Laramie

The Wyomericana Caravan pulled into Wyoming Public Radio on May 21 ahead of their kickoff show in Laramie at the Gryphon Theatre.  J Shogren from Centennial, Patti Fiasco from Laramie/Fort Collins, and Screen Door Porch from Jackson. The Caravan each played their own Wyoming brand of Americana on Morning Music. They also talked with Grady Kirkpatrick about the upcoming tour and the memories from last year's tour with Jalan Crossland.

Their live set will be featured on an upcoming Single Shot Live session. Stayed tuned!

Watch a short documentary about the WYOmericana Caravan tour from summer 2013. The film was entered into the Wyoming Short Film Contest and was among the finalists. 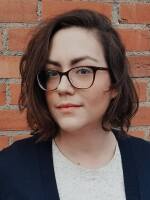 Anna Rader
Anna Rader is the digital producer for multiple podcasts at Wyoming Public Media: the station’s award-winning flagship podcast HumaNature, PRX's Project Catapult podcast The Modern West, and Carbon Valley. She helps shape what you see on this website, along with social media outreach and branding. She is also involved with production, hosting, and programming in various areas at the station.
See stories by Anna Rader
Related Content