As Idaho And Utah Vote On Medicaid This Fall, Patient Health Options Hang In The Balance

If you’re poor and you get really sick in Idaho, your health care options might be really different than say, if you live in Colorado or Montana.

That’s because Idaho and Utah opted NOT to expand Medicaid - the government funded health program for low-income people. But this November, voters might change that in both of those states.

Scranton has an undiagnosed neurological disorder, and she’s one of up to 62,000 Idahoans who would receive health insurance under Medicaid expansion.

Several times a day, she loses control over portions of the right side of her body. During one of these “episodes,” as she calls them, her face droops and her eye closes. Her arm and leg muscles cramp up into painful charley horses that leave half her body swollen and aching.

Her doctors told her the symptoms are a lot like strokes or multiple sclerosis, but she’s tested negative for both. It all began about five years ago.

At the time, Scranton was working with autistic children as a behavioral therapist. Back then, she had health insurance, but her doctors couldn’t figure out what was wrong. Her condition got so bad that she had to stop working, which meant she lost her health benefits.

“All I know is that it’s a functional neurological disorder but they can’t find the disorder,” she says.

Today Scranton gets about $1,150 in monthly disability benefits. But as a single woman on a limited income, she didn’t immediately qualify for Medicare. There’s a wait period of two years for that. However,  if Idaho voters opt to expand Medicaid this fall, she’d be covered immediately.

“I need to be under the care of a neurologist, so that they can watch the progression and treat the progression,” Scranton says. She hopes that additional tests or new technology might help doctors diagnose her condition.

Instead she says she can only afford to see a general practitioner who charges on a sliding scale based on patient income. If she lived somewhere else, things could be different.

Thirty-four states opted to expand Medicaid under the Affordable Care Act. Diane Rowland is with the Kaiser Family Foundation, a nonprofit health policy think tank. She says the expansions helped millions of uninsured people get healthcare.

“There’s no one picture of the individuals who could benefit, but the one common characteristic is that they’re all going to be very low income,” says Rowland.

As a graduate student, Reyna Ulibarri was earning a few thousand dollars a year when Colorado expanded its Medicaid program and she became eligible even though she was single. A couple of years ago, she was just wrapping up her dissertation when life changed dramatically. She got into a terrible car accident. 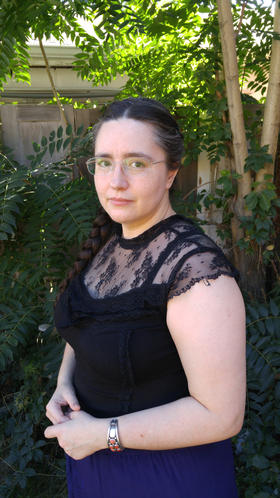 “It was a hit and run,” says Ulibarri. “No one ever stopped. One minute we were just driving along, the next minute I now am regaining consciousness, slowly aware that there’s an intense pain in my head."

Ulibarri was rushed to an emergency room in an ambulance, where she saw doctors who diagnosed her with a traumatic brain injury. She says she never would have gotten that level of care, much less gotten into an ambulance, had she not had Medicaid and the doctors it paid.

“That would be so much worse if I didn’t have medical knowledge behind me this whole journey,” says Ulibarri.

She still needs a great deal of care. Her vision is impaired, she gets tired easily and she has trouble concentrating.

“I really can’t read comfortably, which an impossible thing to have if you want to be a professor,” Ulibarri says.

Her Medicaid coverage allows her to get physical therapy and more treatment, and she hopes she’ll soon be able to work again.

That’s a prospect that feels far away for Donna Scranton in Boise. She used to love fishing, camping and playing with her grandkids at the park. Those activities feel impossible now.

Scranton says if Idahoans vote to expand Medicaid coverage this fall, the first thing she’s going to do is make an appointment with a neurologist.

Meanwhile, her seizure-like episodes have been getting worse. She recently went to the emergency room because she had a muscle attack in her neck that started constricting her throat. That was a new symptom.

“The mental anxiety of this is probably the hardest because when I do get a new symptom I want to go to the doctor. I want to say, 'look, now it’s doing this. What’s my prognosis now?' I don’t even know that. This might be killing me. I just don’t know."

Report Looks At Discrepancies In Health Accessibility For Indigenous Groups

Legislators learned about innovations at the Northern Arapaho Tribe’s health clinic when they gathered in Fort Washakie for a tribal relations committee meeting this week. The tribe took over its health clinic from the federal government back in 2016 in hopes of addressing health disparities they struggle with among their members.

During the 2017 fiscal year, our region received a collective $10 million in grant funding through a federal program called Title X, the brunt of it going to state health departments to support family planning services, especially for low-income and underserved patients.

Now the Trump administration is proposing changes to the program, which has been around for almost 50 years.

Idaho And Utah Voters Put Medicaid On The Ballot