The National Park Service is giving museums and universities across the country grants to return ancestral artifacts and human remains taken from Native American tribes over the years.

Jen Shannon is an associate professor in anthropology and curator of cultural anthropology at the University of Colorado Museum of Natural History, which received about $75,000 this year in NAGPRA funding. She says the grant will, in part, allow them to bring representatives from seven Apache nations to visit the museum next year and consult on Apache items.

“They will be reviewing the entire (Apache) collection that we have in our museum. That includes everything from baskets and bowls, dresses and bows and arrows, moccasins, clubs and masks, jars and baskets. You name it,” she says.

Shannon says the goal of this visit is to determine which objects are important for contemporary religious practices so that they can be returned and used.

“The purpose of the return of the items is for contemporary practice. It’s to support cultural continuity or perhaps the revival of certain ceremonial practices,” says Shannon, adding that many those practices were considered illegal until the American Indian Religious Freedom Act was passed in 1978. 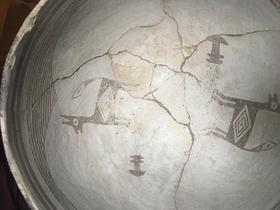 The Denver Museum of Nature and Science received almost $85,000 to study a large collection of artifacts and human remains that was excavated in New Mexico from sites that range in age from about 700 years old to 1,700 years old.

“As part of our moral, ethical and legal responsibilities we garnered these funds so we can go through that collection, find the human remains, find the funerary objects and so on and work with the tribes of the Southwest to get these folks their ancestors reburied,” says Steve Nash, senior curator of archaeology at the Denver Museum of Nature and Science.

He says after they’ve identified the number of remains and which funeral objects they were found with, they’ll meet in New Mexico with representatives from about 20 tribes to plan for reburials.

Correction: A previous version of this article said that NAGPRA "requires that federally funded institutions return human remains and certain cultural items." The law does not explicitly require that remains or artifacts be returned; it requires that institutions consult with tribes about their return and return them if the tribes ask for them.

The independent film Neither Wolf Nor Dog is set to screen in Jackson this week. Set in Indian Country, it showcases Native actors and explores the history of the Wounded Knee massacre.

Orientation is a common activity for freshmen at any university. While there are students who don’t want to go, some relish the chance to meet new people and well… orient themselves. University of Wyoming President Laurie Nichols set a goal of increasing the number of Native Americans attending UW, especially since enrollment of tribal members recently reached an all-time low. Wyoming Public Radio’s Taylar Stagner participated in the Native American Research Center’s first-ever orientation. The goal is to make students comfortable from day one.

Report Looks At Discrepancies In Health Accessibility For Indigenous Groups

Archaeologists Rush To Document Mysterious Trees Before They Disappear

Walking through forests across the Mountain West, you might not realize you’re walking past historical artifacts big enough to crush you. These artifacts are pine and cedar trees that have had their bark peeled off in a special way. The trees are a bit of a mystery to archaeologists, and one they’re running out of time to solve.

Last week, Governor Matt Mead approved new social studies content and performance standards. The changes are the result of the 2017 Indian Education for All Act, which requires schools statewide to teach the history and culture of the Eastern Shoshone and Northern Arapaho.