This week, the third annual Grand Teton Winter Music Festival brings together speakers and musicians for four days of music and culture in Jackson.

The winter festival is an expansion of the long-running summer music festival. This festival will feature Chicago’s Fifth House Ensemble, a fluid multi-instrument group.

This year’s festival highlights American contributions to classical music. “One of the reasons that we’re working with this group is because they’re very much championing new music – and new American music.

So, they’re actually bringing a composer with them, Dan Visconti, who will also be doing a lecture on the creative process, and you know, and how does it go from an idea, to on the score, to a performance,” said Andrew Todd, the festival director and a concert pianist himself.

The festival will also feature a saxophone quartet and arrangements from summer festival performers.

Both the festival and Fifth House Ensemble know the importance of community outreach. “While we put on four concerts and we have two lectures as part of the Winter festival, we also do about twenty school visits with all of the performers who are coming here,” says Andrew Todd. He hopes the festival inspires and excites young musicians in local high school and middle school bands.

The first concert is Wednesday, January 31. 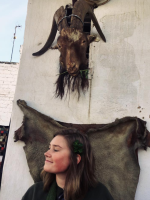 Lila Konecky
Lila Konecky is a third year student studying International Studies and Arabic at the University of Wyoming. She recently studied in Morocco and can't wait to go abroad again! In her free time, Lila enjoys reading, hanging out with friends, and spending as much time outside as possible.
See stories by Lila Konecky
Newsletters
Stay connected with our weekly and monthly newsletters! Get the top stories in local and regional news, podcast updates, and much more straight to your inbox.
SIGN UP
Latest Stories
Related Content