An award-winning Broadway play makes its Wyoming premiere this weekend. Laramie-based Relative Theatrics is staging David Ives’ 2010 play "Venus in Fur" at the Gryphon Theatre in Laramie. The show is directed by Anne Mason and features local actors Dan Keegan and Aili McLellan.

The play centers around playwright/director Thomas (Dan Keegan), who is desperate to find an actress to play Vanda (Aili McLellan) in his adaptation of the classic sadomasochistic tale "Venus in Fur". His search turns up an actress—coincidentally also named Vanda—who although utterly wrong for the part, captures Thomas’ interest with her seductive talents and secretive manner.

Director Anne Mason says audiences will enjoy the twists and turns of the story, as well as the power dynamic between Vanda and Thomas. “It’s a sexy play, but a lot of that is intellectual, rather than physical,” she says. Mason says she believes theatergoers will also appreciate the humorous and intellectual nature of the production. “I think audiences will appreciate the comedic quality of the play—it makes some of the risqué material palatable. The humor balances it, keeps it real.”

The most enjoyable aspect of the production, according to Mason, is the blend of University of Wyoming and community involvement. “I’m most excited about having people from the university and the community—the design team was a mix of UW theatre students and members of the community,” Mason says. “The actress who plays Vanda, Aili, is a musical theatre sophomore at UW, and I’m very pleased with what she’s done with the role.”

"Venus in Fur" runs January 28-30 and February 4-6 at the Gryphon Theatre. All performances are at 7:30 p.m. and are followed by a chat-back with the actors and design team. 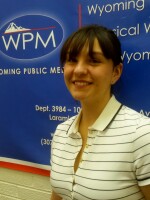 Sara Teter
Sara Teter is a senior in Journalism and Global Studies at the University of Wyoming. Originally from Connecticut, she has lived in Wyoming since 2005. Her interests include travel, sketching, good reads, and the pursuit of shenanigans.
See stories by Sara Teter
Newsletters
Get the top stories in local and regional news, podcast updates, and much more straight to your inbox.
SIGN UP
Latest Stories
Related Content