Half of Native Americans living on Indian reservations say they or a family member feel they’ve been treated unfairly by the courts. That’s according to a new poll by NPR, the Robert Wood Johnson Foundation and the Harvard T-H Chan School of Public Health. It’s a lack of justice that Wind River Reservation residents say they live with every day. As Wyoming Public Radio’s Melodie Edwards reports, now the tribes are working together to solve that problem.

A new report says Wyoming’s prison system is growing, which is driving up costs and the culprit is the lack of prison reform a new legislation that could lead to more people being placed behind bars. ACLU of Wyoming has released a report called Bucking the Trend: How Wyoming can reverse course through reduced incarceration and lowered costs.

This month the federal government released a dire assessment of climate change that says human beings are likely the cause of the problem. But, as Matt Laslo explains, the report isn’t having an impact on Wyoming lawmakers or the Trump administration.

Anders Fogh Rasmussen is the former Prime Minister of Denmark and the former Secretary General of NATO. Rasmussen made his first trip to Wyoming this week discussing the topic of America’s will to lead or perhaps not lead when it comes to world affairs. Rasmussen thinks it’s essential to return to being the world’s leader. Bob Beck asked him what he thought about the Trump administration’s approach.

For the last eight months, a legislative committee has been trying to wrap their heads around the true cost of K-12 education. Senator Dave Kinskey is part of that effort, and he’s become well known for saying he wants to see . . . the most bang for the buck. Wyoming Public Radio’s Tennessee Watson visited Kinskey in Sheridan to ask him what that means.

In Threatened Bird's Uncertain Fate, Some See An Opportunity

Changes are coming to the 2015 sage grouse management plans. The amendments are giving some businesses hope, but as Wyoming Public Radio’s Cooper McKim reports, others are worried it could unravel a decade of negotiation and compromise.

Seven grizzlies have been shot and killed by hunters in Wyoming, since the state took over grizzly bear management. That compares to two grizzlies killed last fall. Four grizzlies were killed in Park County alone this year, including one that Game and Fish put down, after it was shot. And, four people were injured in bears attacks. The question is how can those conflicts be reduced? Penny Preston reports experts say preparation is the key.

In early September the Virgin Islands were struck by two category five hurricanes . . . fourteen days apart. Today, the islands' infrastructure remains badly damaged. Nearly 73% of residents are still without power. A student from the University of Wyoming was in the Virgin Islands when Irma, the first of the two hurricanes, hit. Sara Kirkpatrick was spending a semester abroad on the island of St Thomas. She had only been there for a few weeks when she heard about the hurricane’s approach. Unable to leave the island, she was forced to weather the storm. Travis, a local classmate, offered to shelter Sara at his family’s house. 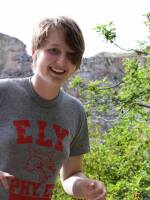 August Lah
August was born and raised in northern Minnesota. She received a BA in Writing, Literature, and Publishing from Emerson College and is completing her MA in American Studies at the University of Wyoming. Her free time is scarce these days, but when she has it she enjoys reading, exploring Wyoming’s great outdoors, and sleeping on the couch with her two cats.
See stories by August Lah

Matt Laslo
Based on Capitol Hill, Matt Laslo is a reporter who has been covering campaigns and every aspect of federal policy since 2006. While he has filed stories for NPR and more than 40 of its affiliates, he has also written for Rolling Stone, The Atlantic, Campaigns and Elections Magazine, The Daily Beast, The Chattanooga Times Free Press, The Guardian, The Omaha World-Herald, VICE News and Washingtonian Magazine.
See stories by Matt Laslo

Penny Preston
When Penny Preston came to Cody, Wyoming, in 1998, she was already an award winning broadcast journalist, with big market experience. She had anchored in Dallas, Denver, Nashville, Tulsa, and Fayetteville. She’s been a news director in Dallas and Cody, and a bureau chief in Fayetteville, AR. She’s won statewide awards for her television and radio stories in Arkansas, Tennessee, Oklahoma, Texas, Colorado, and Wyoming. Her stories also air on CBS, NBC, NBC Today Show, and CNN network news.
See stories by Penny Preston