Wyoming missed out on last uranium boom, but planning for the future

Glaciers in the Wind River Mountain Range have been receding for a long time, and a new study looks at how that’s affecting the ecosystems in high alpine streams. Wyoming Public Radio’s Willow Belden spoke with Craig Thompson, one of the authors of the report. He’s a professor of engineering and applied science at Western Wyoming Community College, and he’s been studying these glaciers for more than two decades.

Are foreign herders the black sheep of immigration reform?

Debate over the immigration overhaul has found its way to the vast open spaces of Wyoming. Here, Peruvian guest workers on H2-A visas tend thousands of sheep. These shepherds make just $750 a month to be on the job around-the-clock, usually alone for months on end. That's around half of what other agricultural guest workers make because sheep ranchers receive a special exemption from minimum wage requirements. Ranchers say it’s needed in order to save this small, struggling American industry. But worker rights advocates say it’s exploitation.  Wyoming Public Radio’s Sara Hossaini reports.

Sheridan-based historian Val Burgess is passionate about World War II Prisoners of war. Through her non-profit, Wars’ Voices, she and her husband Jerry are working to record and archive the stories of World War II P-O-Ws.

For the first time, non-motorized trail enthusiasts will gather formally to discuss ways that communities, land managers, and others can improve trails across the state. Tim Young of Wyoming Pathways and Angela Emery, the Director of Casper’s Platte River Trails talk with Wyoming Public Radio’s Bob Beck about the Wyoming Trails Summit.

Where some people see a weed, others see a gold mine...  At least that’s the case in Richard and Claire Dunne’s Absaroka Farm in North Central, Wyoming.  A farm that, if you drove past it, you might think was just another stretch of the prairie. Although sagebrush seed is in demand, growing it commercially is a niche marked… and some people think it’s crazy.  Wyoming Public Radio’s Luke Hammons filed this report.

Sheridan author Tom McIntyre has a new book out called “The Snow Leopard’s Tale.” It’s a story that takes place on a high Tibetan plateau and is written from the point of view of a snow leopard named Xue Bao. Wyoming Public Radio’s Willow Belden spoke with McIntyre about the book, and he described it as more of a fable than a novel.

As a graduate student in UW’s Creative Writing Program, LuLing Osofsky was fascinated by the various ways she saw Indian culture present in Laramie. South Asian students celebrated traditional festivals on campus, and the town had a good place to get curry. She writes about experiencing these pockets of India in her series of vignettes called “Wild Wild East: Finding Hints of Asia in the West

Irina Zhorov
Irina Zhorov is a reporter for Wyoming Public Radio. She earned her BA from the University of Pennsylvania and an MFA from the University of Wyoming. In between, she worked as a photographer and writer for Philadelphia-area and national publications. Her professional interests revolve around environmental and energy reporting and she's reported on mining issues from Wyoming, Mexico, and Bolivia. She's been supported by the Dick and Lynn Cheney Grant for International Study, the Eleanor K. Kambouris Grant, and the Social Justice Research Center Research Grant for her work on Bolivian mining and Uzbek alpinism. Her work has appeared on Voice of America, National Native News, and in Indian Country Today, among other publications.
See stories by Irina Zhorov 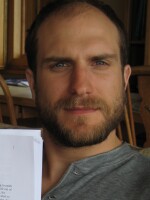 Luke Hammons
Luke Hammons is currently interning for Wyoming Public Radio's news department. Before moving to Laramie, Luke lived for two years in Brazil, where he worked as an ESL Instructor, trained in the Brazilian martial art of capoeira, and wrote various fiction and poetry pieces for publication.
See stories by Luke Hammons

Sara Hossaini
Sara Hossaini is a reporter for Wyoming Public Radio. She holds a bachelor's degree in broadcast journalism from the University of Nebraska-Lincoln. She brings a blend of documentary journalism and public interest communications experience developed through her work as a nonprofit multimedia consultant and Associate Producer on national PBS documentary films through groups such as the Center for Asian American Media, Fenton Communications and The Working Group. She likes to travel, to get her hands in the dirt and to explore her creative side through music, crafts and dance.
See stories by Sara Hossaini