Yellowstone Superintendent Retires Rather Than Accept Reassignment to D.C. 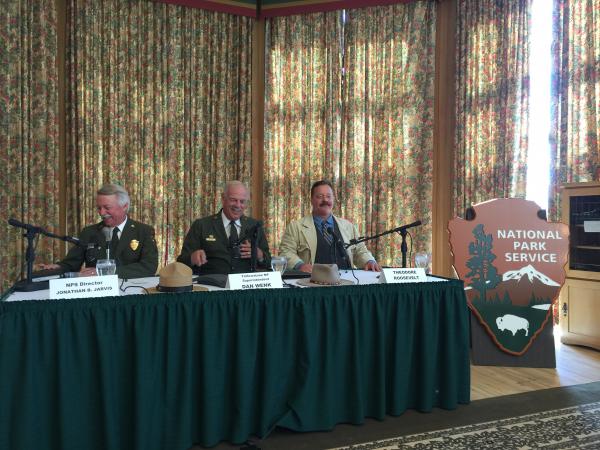 The head of Yellowstone National Park says he plans to retire next March, ending a more than four decade run with the National Park Service. The surprise announcement came after speculation he was being reassigned for political reasons.

“I’m 66 years old,” he said. “I did not see that I had that kind of energy that I could commit to three to five years and so I made the decision to retire.”

Wenk is one of many senior leaders at the Park Service targeted for reshuffling.

According to a recent Inspector General report, more than half of those leaders surveyed felt they were being reassigned for political or punitive reasons. Or because of their prior work on climate change and conservation.

Jeff Ruch is with the watchdog group Public Employees For Environmental Responsibility. He said it’s all about loyalty.

“What they are trying to do is not just move people but they’re trying to instill the feeling that if anybody does the least bit to displease political leaders, they’re gone,” he said.

Ruch believes this contributed to his reassignment.

“They didn’t think he was a loyalist or basically that he wouldn’t say ‘how high’ when they said jump,” Ruch said. “He was an independent person who’d been with the agency for more than four decades and frankly that’s not the kind of person they want.”

Wenk still has some loose ends he wants to tie up before he retires next year, including the transfer of some Yellowstone bison to tribal lands on the Fort Peck Indian Reservation in Montana.

That work will take some cooperation with the Trump administration and Wenk needs to play nice if he wants to finish his career in Yellowstone, according to Ruch.

“The Interior Department doesn’t need to allow him to stay where he is until next March,” Ruch said.

Ruch said they can still transfer him with very little notice.

For his part, Wenk said he had disagreements with the Interior Department on how to manage the park’s bison but he never felt pressure to be loyal to the Trump administration.

“Did we have some difference of opinion on occasion? About especially wildlife and resource issues? But that’s no different in this administration than it was in any other administration,” Wenk said.

“I’m not aware of any politically motivated kind of pressures,” Daines said. “Dan did not mention that to me at all. I’ve not heard any of that from Secretary Zinke.”

March is still a ways away and Wenk said he’s happy he can stay in the nation’s oldest national park until then. His first job was there. After he retires, he hopes to hang out with his grandkids in South Dakota.

“I hope to be engaged in resource issues, that have been the center focus of most of my professional career,” he said. “What form that takes is something that I’ve not thought a lot about yet. I’ve just been trying to think about how best to manage Yellowstone.”