For the past three decades, Gray has worked as a fire ecologist for various government agencies on both sides of the border. He’s a fast hiker with dark, wavy hair and a young face – a self-described glass half-empty kind of guy. A worrier.

As an eerie wind begins to blow, he glances at the rows of charred, teetering dead pines all around us.

“I don’t want to get trapped in here,” he says. “There’s no cell coverage.” 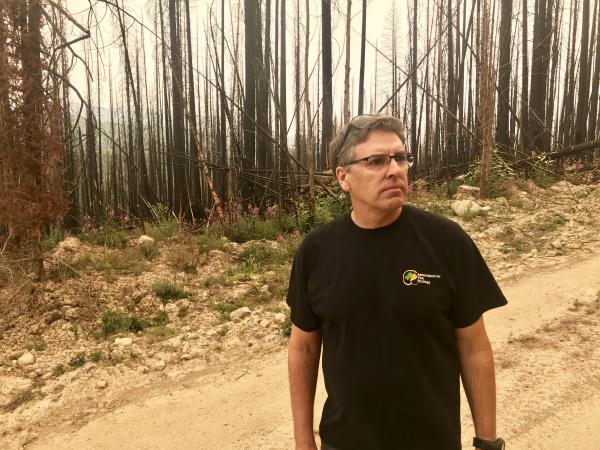 This mountain burned last year. Before that, it was harvested, which is an industry word for logging. British Columbia is one of the biggest softwood lumber producers in the world.

Many U.S. houses are built using pine trees harvested from these forests.

But in recent years, massive, unprecedented wildfires have swept across the province – just like the one that ran through this patch of logged land. Gray points to some charred stumps.

“This is an area that was partially harvested,” he says. “The fire didn’t stop here. It burnt just as hot here as it did in the places that hadn’t been harvested.”

Well, they harvest the trees that are great for lumber. But it’s the millions of sickly, dead and skinny trees that help lay the groundwork for big fire.

Those are the ones that overcrowd a forest, dry out during the summer, and then turn into kindling.

Gray says many British Columbia timber companies can’t squeeze a buck out of all those crappy trees and brush, so they don’t harvest them. And that’s created a problem.

“We kind of gut shot the landscape,” he says.

He says the B.C. timber industry cherry-picked the best stands, left them full of slash – that’s the woody debris left over from logging – and in between those cutblocks left patches of dead trees.

But the British Columbia government says logging can ease wildfires if companies take steps to mitigate wildfire risk, such as burning slash after they log.

“Industry has an important role in reducing that risk,” Kelly Osbourne, fire management planning forester for the British Columbia government, says. “There’s a requirement for a person carrying out an industrial activity such as logging and harvesting to both assess and abate the fire hazard that’s been created by the industrial activity.”

How often logging companies do that depends on who you talk to. But Gray is convinced most companies don’t.

In a report sent to the B.C. government last year, Gray and other fire ecologists said logging also decreased forest diversity because companies replanted the same trees over and over.  That’s contributed to unhealthy, more fire-prone forests.

However, Gray doesn’t blame the logging industry for the current crisis in B.C. He says climate change, a bark beetle epidemic, and decades of poor forest management are all much bigger drivers.

Besides, he says it’s not the industry’s job to ease wildfire:

And here’s a hard truth: that social problem isn’t going away.

Forests need fire like people need sex. Sure, wildfires can be hot and dangerous for humans, but it’s necessary for the health and reproduction of the forest.

But over the past century, governments have put out those fires because more and more people are moving out there and they don’t want their homes burned down.

Gray says that’s created a problem that won’t be solved in his lifetime. The megafires and smoky summers are here to stay.

“That’s a really hard concept for people,” he says. “‘You mean we can’t fix it?’ No, unfortunately we can’t.’”

As he walks through the charred forest in British Columbia, Gray says if people trim back those skinny, weak trees, do more prescribed burns, and drastically reduce carbon emissions now, there’s a chance they could eventually ease wildfires for future generations. Gray hopes that happens, but he isn’t optimistic. 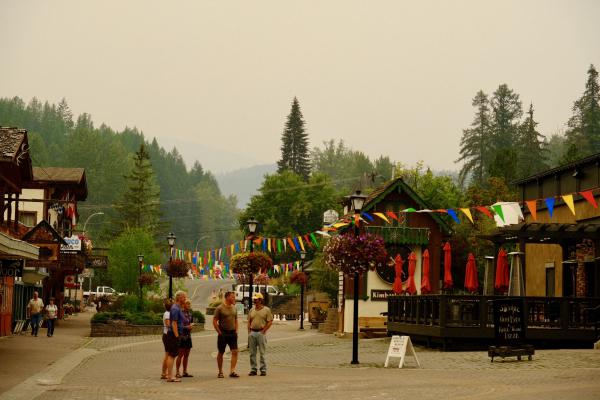 But are Americans learning from their neighbors to the North?

Back in August, President Trump tweeted about raging wildfires in California. He said we needed to “tree clear to stop fire from spreading.”

The U.S. Interior Department and other politicians later echoed this call for more timber harvesting to help ease wildfires.

“When I was a kid growing up in Montana, there were thirty active sawmills across our state,” he says. “Today, we’re down to eight.”

Daines says environmental litigation and an ongoing timber war with Canada have led to less loggers in the forest – and that’s led to more severe wildfires.

“So when you think about it, the fuel load is dramatically increasing every year, and ultimately what happens is that either is gonna burn or it’s going to be managed,” he says.

Daines’ vision of active forest management includes more logging on federal lands. He sees it as a way to kill two birds with one stone: bring back sawmill jobs and ease wildfires. This argument isn’t new.

While most big logging companies aren’t interested in the spindly, skinny or dead trees that carry a fire because it’s harder to pull a profit from them, a handful of smaller, independent companies are trying.

“Rather than just butt heads with everybody else going after the medium and large diameter trees, we reconfigured the company to focus on small logs,” Josh Anderson, timber resource manager at Vaagen Brothers Lumber, says.

His company has sawmills on both sides of the border.

“You handle more pieces, there’s less lumber recovered from each log, so your mindset when you process the logs and lumber needs to be a bit different,” he says.

Anderson sees this type of commercial thinning as the future of the timber industry, especially as megafires become more and more severe.

Higuera says thinning only really works to ease wildfires if you do it often and light a controlled burn every decade or so. He compares it to mowing a lawn.

“You mow a lawn or you cut your hair and it grows back,” he says.

So Higuera says thinning and burning is better used on a much smaller scale – around towns and communities – to create a kind of fire-hardened shield that keeps people safe from wildfires.

Daines agrees that fuel treatments like this can work. But he also thinks thinning should include the bigger trees as well.

“We need to continue to thin our forests, which includes the, quote, marketable trees,” he says. “I tell you what, I travel around and I visit all these sawmills across Montana. I sit down and visit with county commissioners, I visit with wildlife groups. These sawmills can take a lot more logs.”

Fire ecologists do see a place for harvesting those “marketable trees” on public lands. The money from those sales can help pay for much needed thinning and burning – but that isn’t happening across the board and nobody’s tracking it nationally.

According to Higuera, there are no silver bullet solutions to the complex challenge of living with fire.

“So when I see a policy proposal that goes directly to ‘we need more commercial logging,’ there’s a disconnect there,” he says.

Remember, no matter what people do, these megafires and bad smoky summers aren’t going away in our lifetime.

The climate is changing and the forests are too darn big.

A series of small forest fires that started this week in northern Utah and southern Wyoming are being investigated as arsons.

Western firefighters were working the biggest wildfire in California’s history when they encountered a surprising obstacle: slow internet.

Demand Is Rising For 'Fire Bombers,' But It's Unclear If They Really Work

With wildfires burning through much of the West, there’s high demand for big aircraft to come in and battle the flames from above.

Some River Rafting Companies Are Going With The Low-Flow

Colorado is called “the mother of  rivers” for a reason: it’s one of the most popular states for river rafting in the country.  But like the rest of our region, unprecedented growth, a changing climate, drought, and wildfires are taking their toll on this multi-million-dollar industry.