Willow Pond is like a lot of community fishing holes. It’s in a suburban park beyond the soccer fields and a baseball diamond.

Great blue herons stand sentinel as a pair of pelicans lounge near the pond's edge. They seem oblivious to the racket from the highway nearby.

So does Antonio Cadena. He’s fly-casting. His son, Daniel, 2, is giving his toddler-sized spin-casting rig a break.

“Daniel, do you like catching fish?” his father asks.

The two spend a few mornings a week here. Willow Pond in Murray, Utah, is like community fishing holes around the West. They’re stocked to draw friends and families, and to get people outside for some fun.

“I just want to make sure he gets outdoors and he doesn’t grow up just watching TV all day, every day,” says Cadena. “He comes out here. He’ll run around. He’ll play with the ducks, and he’ll chase ‘em. And when we occasionally catch a fish or two, he likes to touch ‘em and throw ‘em back."

Or maybe take the fish home, simmer them in garlic butter and eat them.

“I think it’s good for him,” Cadena says.

It’s a sparkling spring day, and the Wasatch Mountains are a grand backdrop beyond the Salt Lake Valley. The grass and trees here are greening up. A few men huddle in the shade, coffee cups in hand. One is Jerry Weaver, who comes here most days.

They talk about fishing when they were kids, how they’d spend long summer days outdoors, how their dads taught them how to fish.

“It’s kind of a family thing too,” says Glade Charlesworth, a fellow retiree and fishing buddy. “It keeps families together. It keeps them off the street. It keeps them from crime and stuff.”

They refurbish fishing poles from the thrift store and use them to teach kids who want to learn to fish. They call it “giving back” — but they get a kick out of it. But they also look forward to stocking days – like the one about to happen.

They’re watching a boxy truck roll up. There’s a huge trout painted on the side. Inside are thousands of rainbow trout from the state hatchery.

“I’m going to put about 1,400 fish into the pond,” says Ryan Arthur, an aquaculturist for the Utah Division of Wildlife Resources.

A small crowd watches as he climbs onto the truck’s side and dunks a big net into a hatch on top of the tank. 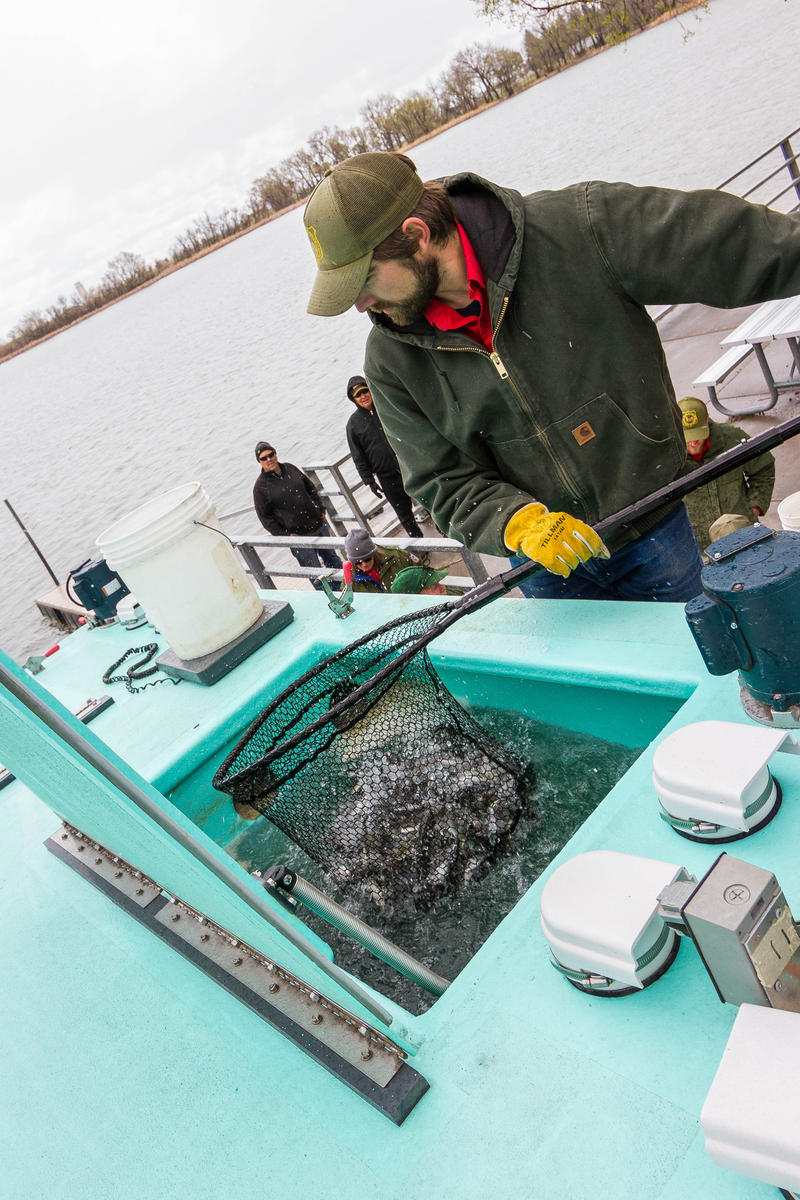 Arthur strains backward to lift a netful of flopping fish out of the tank. Then he twists the net upside down.

Trout – dozens of them - splatter into the pond.

“Here in the city, we’re kind of disconnected I think from a lot of the environment,” Arthur says. “But you can bring them to a park like this, explain to them the fish do need ideal water quality in order to survive. And I think it’s a great way to explain that and explain what habitats are.”

Scenes like this are playing out all over the Mountain West. Wyoming, Colorado, Montana and Idaho – they also stock community fishing holes in the spring and summer.

The conservation group, Trout Unlimited, supports programs like these.

“That thrill of feeling the fish bite,” says Brett Prettyman, a spokesman for Trout Unlimited in the Intermountain West, “and reeling it in and admiring the fish … it’s just an easy way to connect with Nature in an urban environment.”

Fishing at a community park might not be fishing on a mountain river or the ocean, but it gets people excited about being outdoors.

“And we hope,” says Prettyman, “that helps them foster that passion and makes them want to pursue it when they get older, when they have the opportunity get into Nature in the wild experience it out there.”

That’s exactly what’s happening at Willow Pond. The Cadenas are back on the fishing dock.

“Dad got one!” Daniel says, jumping up and down. “We’re gonna keep him!’

Hanging out with friends and family, enjoying the natural world, advice about turning fishing into catching – it’s all here on an ordinary day at the neighborhood pond. And, without being preachy, it’s helping teach the value of a healthy environment.

The Interior Department wants to open up a quarter-million acres at national wildlife refuges for hunting and fishing.

The move would impact 21 states. In our region, it would expand hunting at a refuge in Utah  and another in Montana. It would also open Montana’s Swan River refuge to big game hunting for the first time.

Wyomingites Concerned For The Future Of Wildlife, According To New Study

Wyoming residents value access to fish and wildlife. A recent study by the national survey firm, Responsive Management, shows about half of the state's residents bought a hunting, fishing or trapping license in the last five years.

The study was commissioned by the Wyoming Game and Fish Department in an effort to get a better idea of current attitudes toward fish and wildlife, the department and its management.

After a set of meetings this week, the Wyoming Game and Fish Department is asking the public to help with the future conservation of cutthroat trout in the Bighorn Basin. The department is not proposing specific projects but instead wants to collaborate with the public on a set of recommendations for the trout’s future restoration efforts.