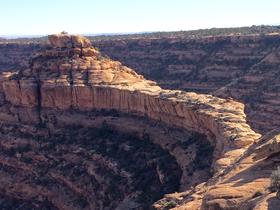 The Society for American Archeology canceled a panel this spring because the Bureau of Land Management wouldn’t pay for its staffers to attend and lead a symposium on Land Management issues.

Since the administration shrank Bears Ears and Grand Staircase-Escalante National Monuments, archeological sites and public lands are a hot topic.

Seventeen BLM staffers were slated to attend and present at the society’s annual conference. Susan Chandler is the president and says the federal workers had already paid and registered.

"I think it was just a matter of permission not being granted at the eleventh hour," Chandler says.

In an emailed statement the BLM said it limited conference participation to three staffers because of cost. The BLM says that the employees were welcome to go at their own expense, although the conference was held in Washington, D.C. and many of the registered employees live and work in Western states.

Chandler says she’s never seen anything like this from the government during one of the society's meetings.

"I think whenever voices are silenced that we lose," Chandler says. "The whole idea of having the conference is for people to get together and share their research and share their ideas."

The Bureau of Land Management has presented Congress with a controversial new plan to manage wild horses.

A 60-day comment period came to an end Monday over a "rescission or revision" to the Methane and Waste Prevention Rule. It’s a 2016 Bureau of Land Management (BLM) rule intended to limit venting and flaring of natural gas.

Since 2010, whenever a parcel of land was nominated to be leased by an oil and gas company, the Bureau of Land Management (BLM) went through a significant review period. There were site visits, comments when draft environmental assessments were released, and an additional 30 days of public comment once the sale was live. But Tim Spisak, acting assistant director of energy, minerals, and realty management for the BLM, said all that review wasn’t efficient for energy production.