With potential federal funding from President Biden's American Jobs Plan, Green River State Representative Mark Baker said that he believes now is the time to create a plan for building a road between Green River and Rock Springs.

Currently, the only way to get directly between the two communities is by driving on Interstate 80. Baker said this is a safety issue, as Green River residents have to drive I-80 to the hospital in Rock Springs, which has heavy truck traffic.

"The two communities existed prior to the Interstate," said Baker. "The interstate system, in some senses, took over the corridor between the two communities. And that was fine when that happened in the 1950s because there weren't trucks that were loaded down with hazardous materials going 85 to 90 miles an hour."

Baker said that if the road is approved, the project would likely cost between $80 and $100 million, and would take at least five years to be completed. 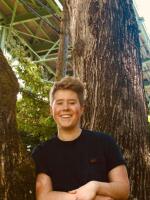 Martha Harris
Martha Harris is from Portland, OR and is currently studying journalism at Brigham Young University, with minors in theatre and global women's studies. Martha loves playing rugby, writing, and cheering on the Portland Thorns.
See stories by Martha Harris
Newsletters
Get the top stories in local and regional news, podcast updates, and much more straight to your inbox.
SIGN UP
Latest Stories
Related Content