Largest Wildfire In Wyoming This Year Under Control

Officials are gaining control of Wyoming’s largest wildfire this year. A 225-acre is about 90 percent under control as of Wednesday while two out of three smaller fires have been put out near the town of Ten Sleep. Bureau of Land Management officials expect all fires to be extinguished by Wednesday.

“You know, I wouldn’t say we weren’t ready for them. But you know, typically in early June, we do get some small fires,” Neighbors said. But with these fires we were experiencing pretty rapid rates of spread and pretty extreme fire conditions for this early in June.”

The National Interagency Fire Center predicts an average wildfire season for the Bighorn Basin. Neighbors said despite some vegetation being dry, he does not expect anything out of the unusual this summer.

“Grass churs quicker there than up on the Bighorn because it’s exposed to the sun. There’s with little shade. Very little water,” Douglas said.

The Bureau of Land Management spent three hundred eighty thousand dollars to control these fires. The Bighorn Basin averages about 16 wildfires each year. 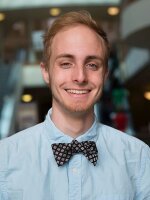 Liam Niemeyer
Liam Niemeyer is a rising junior studying journalism at Ohio University, and is quite far away from his home in Athens, Ohio. With it being only his second time in Wyoming, he is excited to learn more about the state and its culture. An admitted podcast fanatic and audiophile, he also produces and hosts his own radio show back at OU. In his free time, you might find him playing a mean tenor saxophone or sporting a new bow tie.
See stories by Liam Niemeyer
Newsletters
Get the top stories in local and regional news, podcast updates, and much more straight to your inbox.
SIGN UP
Latest Stories
Related Content