The 20th anniversary of the Shepard Symposium on Social Justice kicks off Wednesday, April 6th. The event was started by two members of the College of Education at the University of Wyoming. In 2002, it was renamed in honor of slain UW student Matthew Shepard. Since then, the symposium has grown into a network of organizations and individuals working toward equality. On this milestone, symposium organizer Michelle Jarman says it’s time for a retrospective.

“Because it’s the 20th anniversary we’re really, really excited to bring back one of the co-founders of the symposium - Omowale Akintunde,” Jarman says. “Omowale has done tremendous work I social justice, he’s an Emmy award winning filmmaker, so we’re thrilled to have him come back.”

Akintunde will present during the Friday lunch hour. One of the other keynote speakers is Toronto native Janaya Khan. She’s a global ambassador for the Black Lives Matter movement.

“Janaya brings an interesting perspective," says Jarman. "[She's] talking about an issue that’s very, very important now in the US and how it crosses borders constantly. So, I think that’s going to be really interesting.”

Jarman says this year, there is interest in discussing what community means locally, nationally, and globally. Khan’s presentation takes place Thursday afternoon. The symposium will also hold an anti-racism workshop Friday morning led by a group from the People’s Institute from New Orleans that will focus on fostering conversations about racism.

A full schedule of events and descriptions of the presenters can be found here. 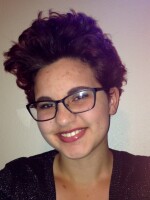 Raena Bush
Raena Bush was born and raised in Wyoming and is most recently from Beulah, population 33. She is currently in her senior year of earning a B.A. in Communication and Journalism with a minor in African American and Diaspora Studies. Her primary interests include broadcast journalism and audio storytelling, which lead her to her current internship with Wyoming Public Media.
See stories by Raena Bush
Newsletters
Stay connected with our weekly and monthly newsletters! Get the top stories in local and regional news, podcast updates, and much more straight to your inbox.
SIGN UP
Latest Stories
Related Content