This Saturday, February 28th, Trampled By Turtles will be playing at the Arts and Science auditorium on the University of Wyoming campus. The band has been one of the hottest bluegrass acts in the last decade. Their most recent album, "Wild Animals," was released last July. Mandolin player Erik Berry spoke with Wyoming Public Radio’s Ryan Oberhelman about "Wild Animals" and how the band and its sound has grown over the last decade. 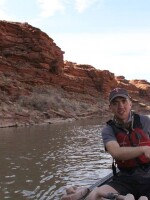 Ryan Oberhelman
Ryan Oberhelman is an MFA student in Creative Writing at the University of Wyoming. He also holds and MA in English from the University of Nebraska where he worked as an Editorial Assistant with the literary journal Prairie Schooner, interviewing authors for the Air Schooner podcast. When Ryan is not at school or behind the WPR intern desk, he can be found fly fishing and wing shooting in the Laramie Plains and the Medicine Bow Mountains.
See stories by Ryan Oberhelman
Related Content