In the wake of the tragic slayings in Orlando last weekend, gun-control unexpectedly dominated Congress this week. Matt Laslo reports from Washington on why Wyoming lawmakers think the debate is misguided.

While many Wyoming voters are paying attention to the U.S. House race, the state’s legislative races will be among the most competitive in the nation. Wyoming Public Radio’s Bob Beck reports.

Wyoming Jobs Are Tough To Find For UW Grads

Wyoming is facing difficult economic times. Last year, the state lost 6,500 jobs, mostly in oil and gas, and things haven’t much better this year. State government is making major reductions and even Wyoming Medical Center in Casper cut 58 positions. Wyoming Public Radio’s Maggie Mullen reports that right now is a tough time for University of Wyoming’s graduates to enter the job force, particularly if they want to stay in the state.

New Book Looks At The History Of A Wyoming Phone Company

In 1914 John Woody started a Wyoming phone company that is now known as Union Wireless. These days it’s a multi-million dollar corporation and one of the state’s great success stories.  Author Terry Del Bene has written a book about the company called A Phone Where The Buffalo Roamed. Bob Beck asked him why this phone company survived for over 100 years while others have faltered.

School Resource Officers On Patrol: A Growing Trend In Wyoming And Nationwide

As more schools make safety and security a priority, School Resource Officers—or SROs—have become the fastest growing job in law enforcement. External threats are rare—and most research suggests that putting cops in schools actually has a negative impact on education. But proponents say, the good officers do for schools and communities can’t always be measured. Wyoming Public Radio’s Aaron Schrank spent a day with some SROs and has this report.

When someone is in a suicidal state often the first professional responders they see are law enforcement. This is true nationwide, but it’s especially the case in Wyoming where the suicide rate is double the national average, and which lacks the mental health resources of more urban areas. For a decade now, Wyoming has been using crisis intervention training to better prepare law enforcement, but the program is slow to spread, especially in rural areas. Earlier this year, Miles Bryan looked into this issue and filed this report.

In stories of the American Revolution, the Civil War, and westward expansion, the lives and roles of women often go untold.

Laramie Author Jennie Lawrence is aiming to change that a bit, with her new book Soap Suds Row: The Bold Lives of Army Laundresses 1802 – 1876. Wyoming Public Radio’s Caroline Ballard sat down for a conversation with the author about the secret lives of laundresses.

Every few years, states conduct surveys to see whether stores are following federal laws that prohibit the sale of tobacco to minors. But who searches for all the places where kids might buy smokes? They’re called Synar drivers. Wyoming Public Radio’s Nathan Martin sent us an audio postcard from his time on the road.

On The Brink Of Extinction, Hundreds Of Wyoming Toads Set Free In Laramie Basin

The Buford Ranch pond is barely more than a puddle on the Laramie plains, but it happens to be critical habitat for the Wyoming toad. The U.S. Fish and Wildlife Service released over 900 of these endangered toads earlier this month. Some say the Wyoming toad is the most endangered amphibian in North America. Wyoming Public Radio's Melodie Edwards reports.

Matt Laslo
Based on Capitol Hill, Matt Laslo is a reporter who has been covering campaigns and every aspect of federal policy since 2006. While he has filed stories for NPR and more than 40 of its affiliates, he has also written for Rolling Stone, The Atlantic, Campaigns and Elections Magazine, The Daily Beast, The Chattanooga Times Free Press, The Guardian, The Omaha World-Herald, VICE News and Washingtonian Magazine.
See stories by Matt Laslo 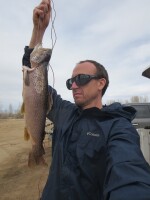