For the next two months the State’s 90 legislators will gather in Cheyenne to consider a wide range of bills. Some ideas will be dead on arrival while others should generate considerable debate.

INSIDE ENERGY: Energy Efficiency May Be Bipartisan Winner

When it comes to U.S. energy consumption, transportation and power plants leap to mind as top power users. Buildings, though, are not far behind. Commercial buildings account for one-fifth of our energy use. Much of that is pure waste, leaking from poorly-insulated walls or lights left on when no one is around. Energy efficiency is one of the few issues with support from both Republicans and Democrats, as well as private industry.

Attorney General Looks Back At Years Of Litigation Over Tongue River

The state of Montana sued Wyoming in 2007, claiming that it violated the Yellowstone River Compact of 1950 by withholding too much water for irrigation and coal bed methane production. But at the end of December, the eight-year-long U.S. Supreme court case concerning the water flows of the Tongue River was finally settled.

If you flew to visit friends or relatives out of state over the recent holidays you probably drove across the state line to a major airport--if you flew out of one of Wyoming’s regional airports you were in the minority. Traffic at most of the state’s airports declined in 2014. That’s the result of a nationwide pilot shortage, but it means Wyoming’s airports will lose a big chunk of their federal funding.

Democrats Get Ready For Debates On Savings And Medicaid Expansion

Income and wealth disparities in the U.S. are the most pronounced they’ve been in decades. Perhaps nowhere is the gap between luxury and poverty more apparent than in Jackson. The small ski town sits in the county with the highest average income in the country. But it’s also home to a growing number of Mexican immigrants who come to work in Jackson’s tourism economy. Teton County residents boast a median household income of $72,000, but for immigrant households, it’s just $26,000. That inequity has repercussions for Jackson's youth.

The Business of Art, The Art Of Business: Wyoming Artist Learns Business Skills From New Program

The Wyoming Technology Business Center at the University of Wyoming has recently started a program to assist artists in the region to develop business skills so they can become more self- sufficient. Wyoming Public Radio’s Pat Gabriel talked with the center's CEO Jon Benson and its Marketing Coordinator Fred Schmechel about why they think the program could be so helpful for Wyoming artists. And they'll be joined by the program's very first artist, Ron McIntosh.

From deep powder in winter to a snowpack that lasts into summer, the Tetons offer an ideal proving ground for athletes. But in the mountains, the stakes are high. Skier and climber Jesse Stover sits down with two of his rescuers to talk about the day that one slip turned a perfect adventure into a death-defying fall.

Lincoln Highway Photo Shoot Documents 'The America That Was Lost'

Ghost towns may conjure images of old shoot-outs, tumble weed rolling down dusty streets. But there are also more modern ghost towns with less romantic stories. Laramie photographer Doc Thiessen is documenting some of the towns along the Lincoln Highway bypassed by Interstate 80. 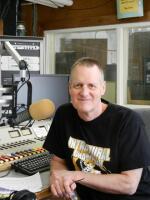 Rebecca Huntington
A multi-media journalist, Rebecca Huntington is a regular contributor to Wyoming Public Radio. She has reported on a variety of topics ranging from the National Parks, wildlife, environment, health care, education and business. She recently co-wrote the one-hour, high-definition documentary, The Stagecoach Bar: An American Crossroads, which premiered in 2012. She also works at another hub for community interactions, the Teton County Library where she is a Communications and Digital Media Specialist. She reported for daily and weekly newspapers in Montana, Idaho, Washington, Oregon and Wyoming for more than a decade before becoming a multi-media journalist. She completed a Ted Scripps Fellowship in Environmental Journalism at the University of Colorado in 2002. She has written and produced video news stories for the PBS series This American Land (thisamericanland.org) and for Assignment Earth, broadcast on Yahoo! News and NBC affiliates. In 2009, she traveled to Guatemala to produce a series of videos on sustainable agriculture, tourism and forestry and to Peru to report on the impacts of extractive industries on local communities.
See stories by Rebecca Huntington