The Rocky Mountains Have Ticks. Scientists Want To Know What Viruses They’re Carrying

Dan Salkeld doesn’t like plunging toilets, filling out tax forms, or clipping his children's toenails. But he loves collecting ticks in Colorado.

The northeast, he says, is humid and chock full of ticks and mosquitoes. “Here, we have snow covered mountains and pine forest and the ticks are not in the same numbers. It's pleasant,” says the disease ecologist with Colorado State University. He estimates he’s collected about 7,000 ticks over his career.

When it comes to ticks people tend to think of the east coast, where the pests are everywhere and they carry Lyme disease. But we have ticks, too -- well into the Rocky Mountains -- and they might be carrying their own disease cargo. That’s what Salkeld and his colleague, Alyssa Beck, have come to Rocky Mountain National Park to find out.

Salkeld dressed in a short sleeve T-shirt and a baseball hat. Beck, a student at the Colorado School of Public Health and (on this day) an apprentice tick-hunter, took a different tack. The Wisconsinite says she’s collected far too many ticks by accident, so she’s zipping into a full-body Tyvek suit. It even has a hood.

“It's like the marshmallow in Ghostbusters,” Salkeld tells Beck. “If you just direct it for the wind, you should inflate.”

They pull out white flannel flags that they’ll use to entice the ticks out of the grass and bushes and head off down a well-trafficked trail through Ponderosa pine forest. They aren’t as interested in the ticks themselves as they are in what might be hiding inside the bugs -- specifically, two viruses. One of them is called Colorado tick fever.

There’s no treatment. The virus gives people fever, chills, aches and fatigue, but it goes away.

“You don't have chronic impacts later on,” he says, unlike with something like Lyme disease.

But the researchers are also looking for something much worse, Powassan virus. It’s a nasty disease currently sickening people in the Northeast and Great Lakes regions. According to the Centers for Disease Control and Prevention, the virus can give people anything from a fever and headache to brain swelling, confusion, seizures and even memory loss. Luckily, it’s very rare. Only about 100 cases were reported in the U.S. since 2007.

“We don't know if that's affecting people here. But that's one of the new poster children of tick-borne disease because it's seems to be coming south and affecting more people than it has done. And it can be fatal,” says Salkeld.

Way before Powassan became a problem in other parts of the country, scientists found it out here in Colorado.

“But few people have looked ever since,” says Salkeld. Until now. 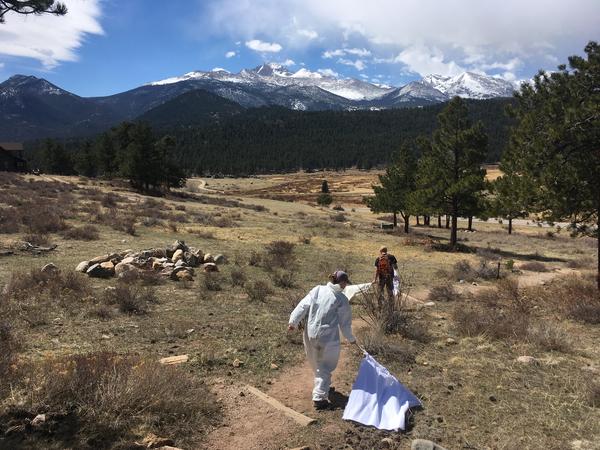 Salkeld and Beck are hiking through Ponderosa pine forest, dragging those white flannel flags across the ground. They’re at about 8,000 feet of altitude, with a backdrop of stunning mountains, a herd of elk lounging about in a golden meadow complete with meandering stream, and 15 minutes in, no ticks.

And then, there it was: the first tick, clinging to the flannel that it thought would provide its next blood meal. Salkeld used tweezers to drop it into a glass vial. From there on out, it was pretty much tick galore.

By the end of the day, the researchers had nearly 100 of the creatures, sorted by location. They were crawling on top of each other, in writhing balls.

“That is my job today, yes,” says Byas, who is also a veterinarian and a PhD student at CSU studying West Nile virus.

Byas opens a lab fridge to reveal a Ziploc bag full of vials of ticks. They look dead, but they aren’t. She needs them alive to keep the potential viruses inside them fresh.

“They're all balled up because they're really cold. But once you take them out and bring them back up to room temperature they'll get really active, which makes them sometimes kind of hard to pull out of the tube,” she says. “They can be surprisingly fast.”

Byas will wrangle the reawakened ticks into little tubes, with some liquid and a metal ball that looks like a BB. Then she’ll plop those into a machine that will grind them into the consistency of fine coffee grounds, or as Byas calls it, “tick smithereens.”

She’ll take the smithereens and separate out the liquid, the part that might have viruses floating around inside. Finally, she’ll run a series of tests for Colorado tick fever and Powassan virus. She’s keeping her mind open to other possibilities because, she says, you never know what you might find.

“You don't know exactly what's going to be in there, so you can look at a very large library of possibilities,” she says. “That's how -- sometimes -- viruses that we don't even know about are discovered.”

Byas and her colleagues should know by the end of the summer if these Rocky Mountain wood ticks contain Colorado tick fever and Powassan virus. They’ll keep collecting and checking in coming years because things are always changing.

“Historically we really haven't had much of a tick problem here in Colorado. However, we know that climate change is dramatically influencing the distribution and rates of tick-borne diseases in other parts of the country,” says Danielle Buttke, a veterinary epidemiologist with the National Park Service and a public health officer with the U.S. Public Health Service.

There are other changes afoot in the Rocky Mountains. Deer and elk are coming down with chronic wasting disease.

Researchers in other parts of the country have noticed that when deer populations drop, Buttke says, “the following year and sometimes the next year we have a really, really high number of ticks looking for blood meal hosts.” Instead of biting deer, they turn to people. Buttke says it’s all speculation whether chronic wasting could lead to a temporary spike in tick-borne disease here in the Mountain West, but it’s a possibility.

“And that's a concern particularly in this area because people aren't practicing the preventative behaviors needed to prevent these diseases,” she says, probably because people tend to forget there are ticks here in the first place.

Luckily, the diseases they carry are completely preventable. Buttke says people just have to remember that there are ticks out there in the mountains – as high as 10,000 feet in altitude – and check themselves for the parasites when they return from a hike.

Tick-borne illnesses can be dangerous. That’s why it is a good idea to watch out for ticks when you are outside this summer.

Ticks in Wyoming do not carry Lyme disease as they do in eastern states, but they can spread Tularemia, Rocky Mountain Spotted Fever, and Colorado Tick Fever. Katie Brian, an epidemiologist for the state health department, recommends seeing a doctor if you’re having abnormal fatigue, headaches, fever, nausea, or rashes after a tick bite. Brian said her office hasn’t heard of any cases so far this year, but she expects to as the summer continues.

WATCH: How A Tick Digs Its Hooks Into You

Spring is here. Unfortunately for hikers and picnickers enjoying the warmer weather, the new season is prime time for ticks, which can transmit bacteria that cause Lyme disease.

Ticks sucked the blood of feathered dinosaurs some 99 million years ago, a new study suggests.

Modern ticks are infamous for biting humans and other mammals. But ticks are very ancient, and scientists who study their evolution have long wondered what (or who) the little vampires ate before there were lots of mammals to feed on. Feathered dinosaurs apparently were among the possible creatures on the menu.

The number of immigrants illegally crossing the southern border plummeted when Donald Trump took office. But the number is again on the rise. In response, the president plans to deploy up to 4,000 National Guard troops.

In West Texas, immigrant shelters are overflowing with recent arrivals and some migrants are trying more dangerous routes to evade capture.

The intake room at Annunciation House, an immigrant shelter in downtown El Paso, is packed these days. Parents and squirming children sit with their travel bags. They are the aggravations of Donald Trump.