Lawmakers In Mountain West Join In Effort To Fix DACA

Members of Congress are pushing to seal the deal on the status of immigrants who came to this country illegally as children.

The decision was supposed to be made by March 5, but that didn’t happen.

“No action was taken, no vote was taken, and so I think it’s pretty frustrating,” says Rep. Mike Coffman, a Republican from Colorado.

He’s one of 239 representatives who sponsored a resolution that would force a vote on immigration, including the status of people currently protected under the Deferred Action for Childhood Arrivals program. The list of sponsors also includes Utah’s Mia Love, Idaho’s Michael Simpson, and Colorado’s Diana DeGette, Ed Perlmutter and Jared Polis.

The lawmakers are using an obscure rule in the House of Representatives, the “queen of the hill” rule, that would require a vote on four individual bills. The bill with the most votes would win.

Two of the bills, the Dream Act and the USA Act, would provide DACA recipients with a path to permanent legal residence in the U.S. A third, the Securing America’s Future Act, would give them temporary status and would be paired with increased enforcement and restrictions on legal immigration. The fourth bill hasn’t been determined yet.

“I would hope that whatever proposal passes is a permanent solution, not just an extension of DACA, and I hope it does deal substantially with the border issues to where the president will sign it, not veto it,” says Coffman. 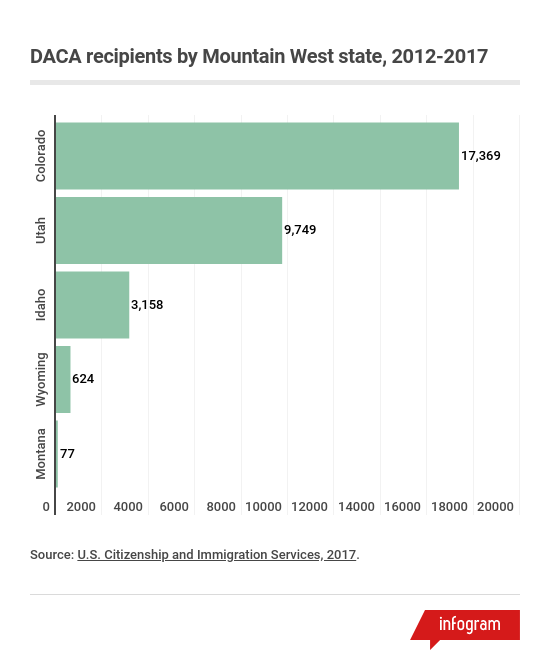 But Violeta Chapin, a law professor at the University of Colorado, is skeptical the move will result in actual legislation.

“I doubt that there’s any kind of legislative solution coming out of here anytime soon. I wish I was more optimistic about it,” says Chapin.

One of the bills, the Dream Act, has come up in Congress over and over again since 2001.

“The Dream Act has come up for a vote at least 16 times in Congress and it has failed every single time,” she says. “And I, quite frankly, think DACA will finally and eventually sputter out and die.”

She says DACA itself is now in a “zombified state,” partially alive only because judges in San Francisco and New York have blocked the Trump administration from rescinding the program.

While lawmakers keep shifting, Chapin continues to work with DACA recipients in Colorado to renew their temporary status, applications that the government will continue to process for the time being.

On Saturday, the University of Wyoming will host a symposium on the Deferred Action for Childhood Arrivals program, or DACA. The event comes as the date March 5th looms over the immigration debate—that’s the deadline President Donald Trump gave Congress to find a solution for the almost 700,000 undocumented immigrants covered by the program.

When lawmakers created the Hathaway Scholarship in 2005, it was meant to encourage all Wyoming high school students to go to college by making it easier to afford.

However, there is one group of Wyoming students that will never qualify for the Hathaway Scholarship: those without U.S. citizenship.

Isabel Perez entered the Wyoming public school system when she was ten years old, shortly after her family left Mexico City for Green River. Perez came to the U.S. without documentation, but said she grew up to be a regular American teenager.

UW's Ability To Protect DACA Students May Be Limited

Following Attorney General Jeff Sessions’ announcement that the Deferred Action for Childhood Arrivals, or DACA would be phased out, colleges and universities are trying to reassure impacted students, including those in Wyoming. But there are a few complications. For one, it’s unknown how many students are protected under the program.

On Tuesday, Attorney General Jeff Sessions announced that the Deferred Action for Childhood Arrivals, also known as DACA, would be phased out.

Suzie Pritchett is an Associate Professor and the Director of the Family and Immigrant Justice Clinic at the University of Wyoming College of Law. She spoke with Wyoming Public Radio’s Maggie Mullen about how DACA came to be, its relevance to Wyoming, and what is now at stake for its recipients.

This story is the first in a series on the Deferred Action for Childhood Arrivals. Listen to the other stories below:

The University of Wyoming student government has helped set up an emergency fund for DACA students.

After Attorney General Jeff Sessions announced that the Deferred Action for Childhood Arrivals program would be rescinded, the Department of Homeland Security stopped accepting new applications. But those who already have DACA status still have an opportunity to re-apply, and the application has a fee.