This fall, the White Buffalo Program took a group of young tribal members to the Big Horn Mountains on the Crow reservation for a buffalo hunt.

The Northern Arapaho Tribe's White Buffalo Recovery and Youth Prevention Program promotes healthy eating. Coming from a tribe of hunters, they want to teach the youth how their ancestors historically relied on the buffalo's lean meat for survival.

Rich Singer, a member of both the Arapaho and Crow tribes and an employee at White Buffalo, coordinated the trip. He worked closely with the Crow Tribe, their Fish Wildlife and Parks Division, their Game Wardens, and the Chairman of the Crow Tribe. For Singer, the trip was more than just a hunt.

A few in the group were first time hunters. Nathan Friday, an employee at White Buffalo and a Northern Arapaho member, said hunting with his grandpa and uncles kept him out of trouble as a young kid.

During the hunt, Friday shot a two-year-old bull, and the group also took a three-year-old cow. The group learned to find, shoot, and dress a buffalo.

He hopes to teach kids across the Wind River Reservation the value of learning to hunt.

"We're using social media to reach the kids since we can't currently teach them in the school systems," said Friday. "We documented everything as far as filming and pictures. It will be sent out to the school districts and the kids to show them that this is a part of who we are."

Millie Friday, the coordinator of the White Buffalo Program, said they are currently editing the video. They plan to release the video to the various school districts on the reservation in the coming months. They also plan to release more virtual tours.

The video will show that a buffalo hunt is not about the trophy, but about healthier habits, lessons, history, and community.

The meat will be eaten at White Buffalo's monthly youth sweat ceremonies. The Arapaho tribe will use the hide and skull for other purposes. The rest of the remains were left with the Crow Tribe. 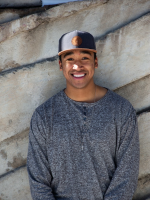 CooXooEii Black
CooXooEii Black belongs to the Northern Arapaho tribe. He recently graduated from Colorado College, where he discovered his passion for writing. He graduated with a degree in English: Creative Writing and is currently attending The University of Memphis to receive his Master of Fine Art in poetry. His creative writing involves themes of cultural identity, cultural history, religion, and truth-telling. He thinks all art is connected somehow, and as a result, he is excited to try new modes of writing.
See stories by CooXooEii Black
Newsletters
Get the top stories in local and regional news, podcast updates, and much more straight to your inbox.
SIGN UP
Latest Stories
Related Content