On Saturday, January 30, athletes throughout the mountain states will come to Wyoming to compete in the sport of yoga. For the second year in a row Wyoming will be the site of the USA Yoga Mountain States Regional Championship. While last year’s event took place in Pinedale, this year the competition has moved to Jackson.

“If you’ve ever been to Jackson Hole, it is kind of this yoga Mecca. It has a lot of studios and a lot of teachers. And yoga love is very high,” says Darcie Peck, founder of the Wyoming Yoga Sports Club, the organization hosting the event.

Althought they're relatively new to the U.S., and even newer to the mountain states, yoga competitions have been held in India for hundreds of years. Peck, who also runs a youth program, says her youth program and her non-profit have been instrumental in bringing competitive yoga to this region.

“Yoga championships are very involved on the East and West coasts, the awareness is really high, and lots of people participate. But not so much in the Mountain West,” she says.

Since last year, the regionals have expanded from just Utah and Wyoming to include six states in total. Winners will move on to the National Championships, which also take place in Jackson. 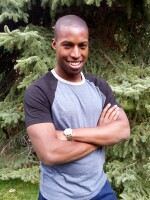 Khalym Burke-Thomas
Khalym Burke-Thomas is a second-year MFA candidate in poetry at the University of Wyoming. He is originally from South Orange, New Jersey, but prior to moving to Wyoming lived in Brooklyn, where he dedicated a year of service to City Year New York, an education non-profit. Khalym received a BA in Asian Studies with a focus in Japanese from Hobart and William Smith Colleges and has been to Japan on three separate occasions. His academic and artistic interests include (but are not limited to) pro-black activism, womanism, and the intersection of queerness and blackness.
See stories by Khalym Burke-Thomas
Newsletters
Stay connected with our weekly and monthly newsletters! Get the top stories in local and regional news, podcast updates, and much more straight to your inbox.
SIGN UP
Latest Stories
Related Content