Hundreds of University of Wyoming students, faculty, and community members protested the outcome of last week’s election with a Solidarity Walk Out Monday.

Reports of discrimination and harassment of minorities have increased across the U.S. in recent days. The solidarity walk, which started at the Wyoming Union before heading downtown and back, was meant to show support for LGBTQ individuals, Muslims, immigrants and other marginalized groups.

Protestors chanted, "This is what democracy looks like," and waved rainbow signs spelling out “Solidarity Wyoming” and “You Belong.”

UW undergraduate Spencer Hu said the solidarity walk was a way for university students to voice their discontent.

“It’s good for us to be out here, show solidarity with one another, and know that we’re all still here, that we haven’t given up,” he said. “We’ve only lost when we’ve given up, and that won’t happen.”

Others from the community came out, too, including Reverend Ken Ingram, who said he wanted to support those who do not feel represented.

“I wanted to support the students and I don’t feel like everyone has had a voice,” said Ingram.

Ben Marks, an employee at the Laramie company The Blue Sky Group, said he was happily surprised to see protestors as they made their way downtown.

“I think it’s fantastic whenever people exercise their constitutional rights,” said Marks. “It’s absolutely important that people do it. I’m kind of excited to see it happening to be perfectly honest."

A few Trump supporters looked on as protestors gathered in front of the Union at the conclusion of the march. UW student Brandon Emery came to the rally wearing a “Make America Great Again” hat to express his support for Donald Trump. Emery said he felt the President-Elect has been fair to all groups, but that he has no problem with the protesters.

“You know, we have our own rights as citizens to express our opinions as they do theirs. We’re peaceful, they’re being peaceful. We’re just going to stand here and listen to what they have to say,” said Emery.

The protest was conducted with the recognition of UW President Laurie Nichols, and the supervision of UW Police. 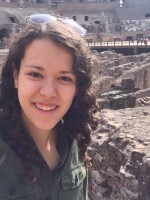