Slippery Slope: Is Skiing Increasingly Just For The Wealthy?

There's no doubt skiing can be a very expensive sport, and now there's a concern that mergers and acquisitions could make it even more pricey. So is it increasingly a sport for the wealthy?

We visited a couple of very different places — Bogus Basin in Idaho and Jackson Hole Mountain Resorts in Wyoming. We start our story in the Tetons.

The mountain draws visitors from all over the world. Lift tickets here average $140/day and staying at Teton Village can cost anywhere from $300 to $2,000/night.

The village is pretty glitzy with boutique shops and upscale restaurants. But ask Jackson Hole’s Communication Director, Anna Cole, and she’ll tell you the mountain has built its reputation on serious skiing.

“This mountain is unlike any other mountain that you will experience ... we have the steeps deeps,” Cole said. 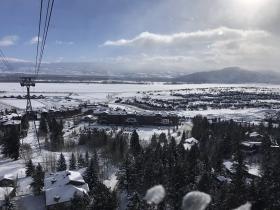 Steeps? I decided to give it a try. Trey Scharp was my guide for the day. As we rode up the Bridger Gondola, he told me he grew up in Jackson Hole and that this mountain isn’t for the faint of heart.

“You have exposed cliff bands and you have some danger. It instills a bit more a of sense of adventure,” said Scharp. “It keeps it fresh, instead of someplace that is completely pampered.”

Scharp takes me on the aerial tramway, which goes up 4,000 vertical feet. At end of the ride, the conductor of trams got the attention of the crowd of skiers and riders.

“If you are considering going to backcountry, please have all proper equipment, knowledge, partner and plan. If you don't know ... ”

On top of the mountain, Scharp led me to the legendary Corbet’s Couloir chute run. 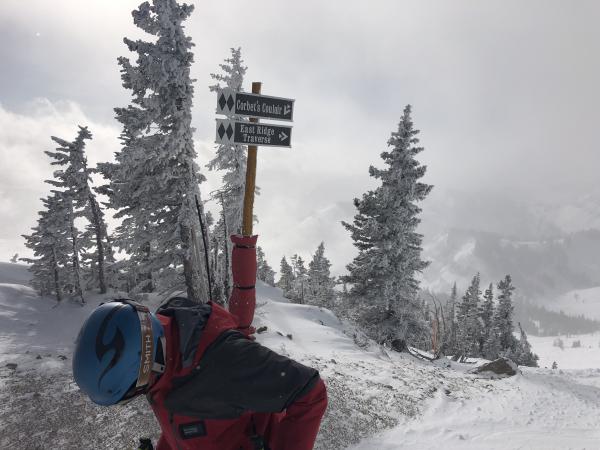 “It’s like dropping into a halfpipe. It’s vertical at the top and one very committing turn,” he described.

My stomach flipped. Thankfully, it was closed and we skied down another less scary black diamond.

At the base, we headed to a popular restaurant for an après-ski. We both opted for a $19 twisted Reuben. The waiter made sure we knew the sandwich was made with salmon, unlike the classic corned beef.

This is the feeling Jackson Hole says it wants you to have. Feeling accomplished after a full day of skiing and then onto enjoy the village with friends. 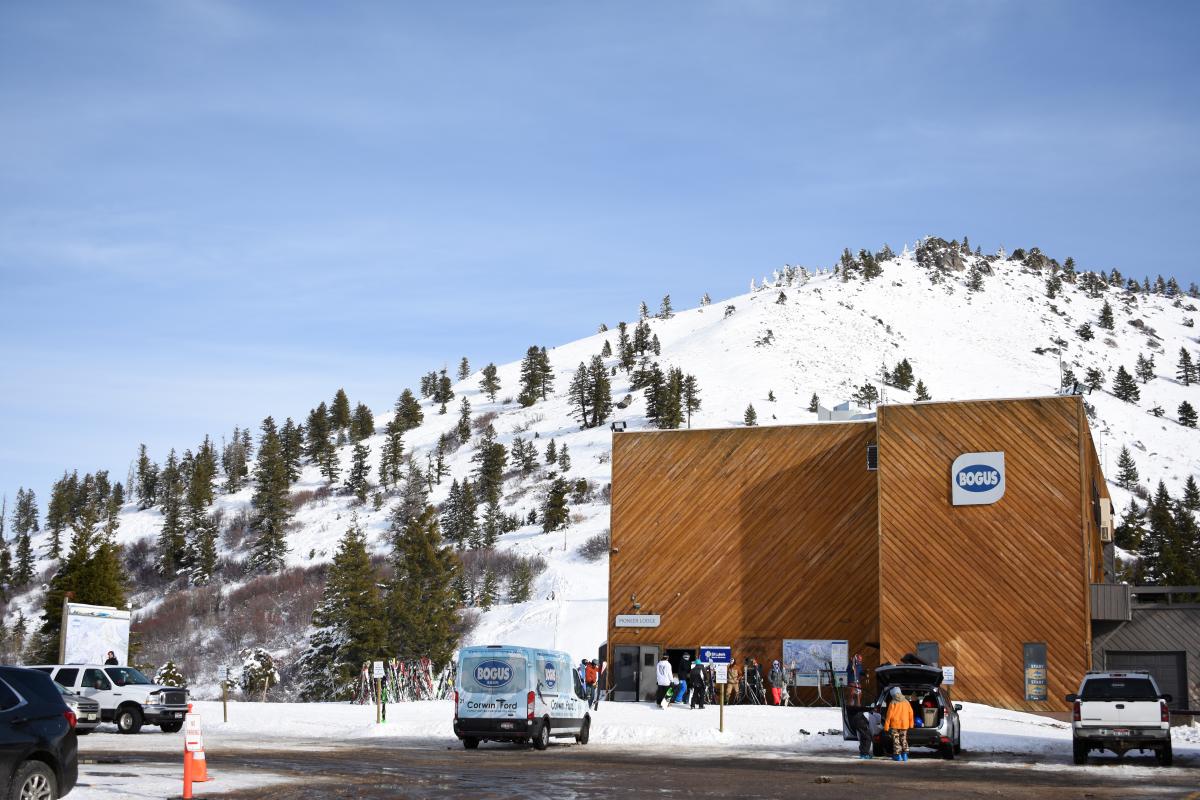 Now over to Idaho for a day at Bogus Basin: No village, fancy restaurants or five-star hotels here. Most families drive in for the day.

Eight-year-old twins Scarlet and Vivian have been skiing at Bogus since they were toddlers, saying they love the jumps and secret caves the most.

The ski area is one of just a handful of nonprofits in the country. 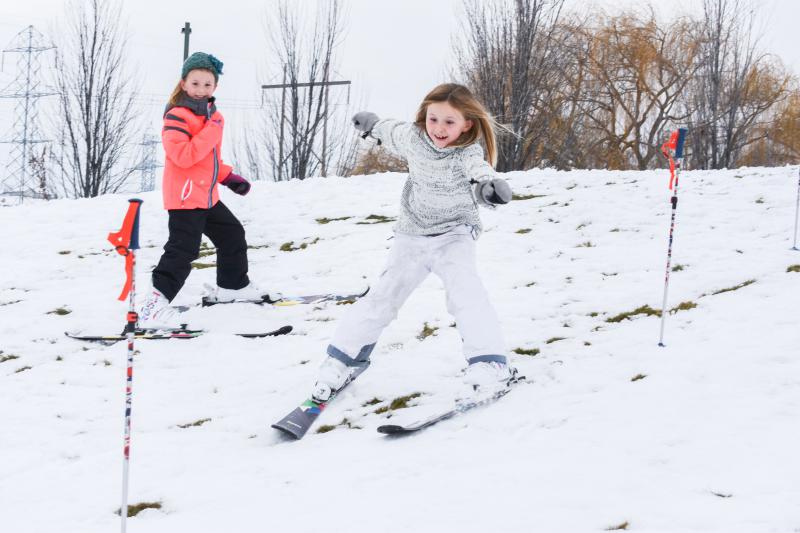 Its operating budget was about $8.3 million in 2016 and they get about 340,000 visitors in the winter, mostly locals. It’s also now open in the summer with a music festival set for June.

Actually, Scarlett and Vivian’s parents had their first date there.

“He was like the classic hot guy out of the 90s,” says Suzanne Chetwood with a laugh.

That classic hot guy she’s talking about is Pat Chetwood and he’s been skiing at Bogus since he was six.

“I remember driving up the road in the back of the station wagon, my mom driving, and having to listen to my sister’s music,” he says.

You know, the classics, like Madonna, The Cure, maybe throw in a little Scorpions. And Pat never stopped going to Bogus. He even quit his high school basketball team when his coach told him he couldn’t do both.

He’s skied a lot of places, but the vibe there keeps him going back.

“All my friends that I grew up with in the 80s and 90s skiing together and we now have our kids and our kids are getting up there. There’s just such a tradition of the love of skiing.” 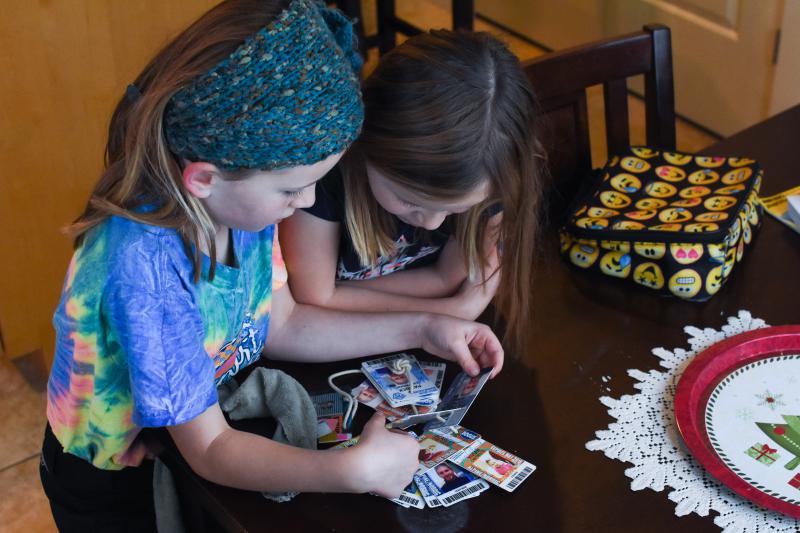 Suzanne says she loves the Bogus vibe too. But the vibes at swanky resorts like Aspen? Well, not so much.

“You get out of the car and you’re like everybody’s got mascara and the fancy outfit,” she says.

“The thing about Bogus is like the most beautiful, stylish women here will just be like, ‘I woke up and put my beanie on and we’re going to have some fun,’ and I love that.”

The next day, we meet at Bogus for lunch – a sandwich for me and fries for the kids – served on olive green cafeteria trays. Pat’s friend, Jesse Wees, is joining us as well. He’s been a ski instructor at Bogus and Jackson Hole and says they’re completely different.

“What they say about Jackson is the locals are better than the pros, so Jackson has a much more serious vibe. Here, it’s about being rad and having fun,” Wees says. 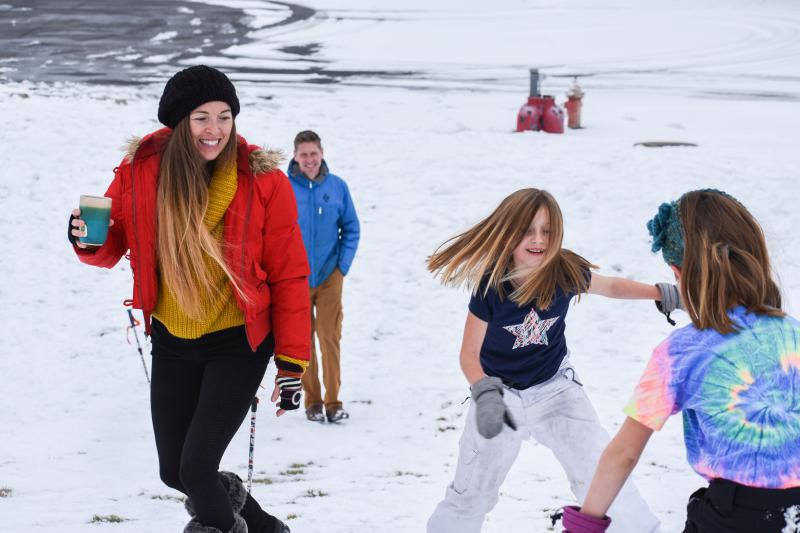 And that’s part of how Bogus Basin officials try to stand out. A day pass here is less than half the price of Jackson Hole and roughly a third of the price of a day pass at Vail.

The low prices and new summer programs may be working. From 2014 to 2017, attendance during the winter has nearly doubled and the ski area has added another estimated 100,000 visitors this past summer.

Last February, Jackson Hole Mountain Resort launched a new extreme skiing and snowboarding competition. 18 men and seven women competed to be crowned the King and Queen of Corbet's. At the awards ceremony, the top male won $5,000 more than the top female finisher. The incident drew attention to the fact that there's nothing in place to guarantee equal prizes in big mountain freeskiing.

If you’ve been out snow shoeing or cross country skiing this winter, you may have noticed bicycle tire marks on the trails. That’s because of a new sport called snow biking. It’s gaining popularity fast, and cyclists and bike shops are thrilled. But some skiers feel the bikes present safety risks. Wyoming Public Radio’s Willow Belden reports.

Wyoming Stories: Being The Youngest To Ski The Iconic, Steep And Exposed Grand Teton

On May 25, 2014, 15-year-old Sasha Johnstone became the youngest person to climb and ski the Grand Teton, according to mountain guides. At 13,775 feet, the Grand is the highest peak in Grand Teton National Park with slopes as steep as 55 degrees, bordered by cliffs dropping away precipitously to create “no fall zones.” Sasha skied the peak with his parents.

At least two states in the Mountain West have opened ski resorts early due to healthy dumps of snow. Many more are scheduled to open next week. This could be a good sign for our region’s economy this winter.

The Snow King Ski Area in Jackson plans to build new infrastructure for outdoor activities, including a new gondola to the top of the mountain where visitors can access a new beginner slope.