On March 15, 2020 Governor Mark Gordon recommended that all schools in the state of Wyoming close to safeguard against the Covid-19 pandemic. The majority of students were back in school by Sept. Until Feb. 2021, four counties were offering students the choice to come in person or stay virtual. Wyoming was early to reopen schools for in person learning compared to the rest of the country.

As the third anniversary of the school closures is fast approaching, there is an effect that can be seen today: one demographic is being left behind in graduation rates.

Wyoming saw a steadily increasing graduation rate, even through the school closures. But one demographic was left behind: lunch eligible students. That means that the student is eligible to receive free or reduced school lunch. This is determined by the family’s income being close to or below the poverty line.

Barry McCann is a social studies teacher at Cheyenne South High School. A high school where over half of its student body is lunch eligible. He said these students have a hard time balancing education with their home life.

“Sometimes a lot of our students work to help pay the bills, and it's difficult to be able to balance those two aspects of their lives to where they can give full attention to both of them,” said McCann. “So they're working, but they're also being a student. And sometimes that work and the other things they have to do outside of school can make an impact. It's just hard to balance that as young people.”

In the 2018-19 school the graduation rate for lunch eligible students was 71.9 percent. After the school closures in the 2020-21 school year this had dropped to 70.1 percent. This drop was a disappointment because before schools closed the graduation rate for this demographic was actually increasing. McCann said the school closures broke up the community that these students relied on. This made it hard to recover even after schools opened to in person learning.

“South just wasn't their school, but it was part of their community, a place where they could come every day, be able to see their friends, be able to eat, feeling, you know, being in a safe environment,” said McCann. “And with that being taken out of there, I think it made it tougher for them to get used to being back in school with the expectations of being there every day, doing the work every day. I just think it's been hard for the South students to regain from that time out because of COVID.”

During the school closures, education in Wyoming made a major transition towards incorporating more online tools than the state has seen before. Chad Auer, the Deputy Superintendent of Public Instruction at the Wyoming Department of Education, said internet is not just available to everyone in the state.

“There were challenges in making sure that all kids had access to technology. The tools make sure that they had Internet access. And there are some rural places in Wyoming where that's more difficult and more challenging than in others,” said Auer.

This lack of internet access is especially seen in lower income communities. According to the U.S. Department of Health and Human Services in 2019, 15 percent of people who live under the poverty line have no internet access in Wyoming.

GEAR UP stand for Gaining Early Awareness and Readiness for Undergraduate Programs. It’s goal is to increase the graduation rates of lower income students and have them prepared for higher education by providing resources these students otherwise wouldn’t have. Wade said the program tried to use its resources to bridge this connectivity gap during the school closures.

“One of the things we tried to do to support that or bridge that was to use resources within GEAR UP to bridge that gap and provide things like laptops, headphones, technology for checkout to our participants.”

But Wade saw difficulty in the programs ability to connect with students.

“It was tough, because with the schools shutting down that was the primary means by which staff accessed participants, right? They identify and they serve students, generally in group settings, after school, during lunch hours, during weekend enrichments, those kinds of things. And with schools shutting down the access to the students became tougher,” he said.

In order to adapt to the changes the school closures created, GEAR UP is looking into utilizing more online resources. Programs like this one may be a part of the solution to the graduation rate decrease.

But Cheyenne South High School teacher Barry McCann is doing what he can, personally, to make sure that low-income students start graduating at a higher rate again.

“One of the things is to try to really get to know the students. So you can understand it’s not that they don’t want to do the work or they don’t have the skills to do the work,” said McCan. “It’s just the life circumstances that they are going through [it] makes it hard so then once you get to know that student then you can make accommodations to what you think will help them.”

As for what schools throughout the state are doing, that’s unclear. Graduation rates for the most recent school year 2021-22 will be released at the end of January. There is only the hope that this downturn is temporary.

1/26/2023 Correction: This story was updated for a more accurate representational timeline of the school closures. By September of 2020 all school districts were open in person except for four, which were either hybrid or virtual till Feb. 2021. 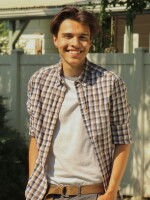 Eric Vigil
Eric is a third-year student at the University of Wyoming. He is majoring in both political science and journalism. Eric feels local media is extremely important in keeping communities whole. Giving local non-profits and listeners a voice on the radio is something he's happy to be a part of. Eric hopes to continue refining his skills at WPM to help local media in the future.
See stories by Eric Vigil
Newsletters
Get the top stories in local and regional news, podcast updates, and much more straight to your inbox.
SIGN UP
Latest Stories
Related Content