Award-winning musician Gaelynn Lea is a one-woman show. The NPR’s 2016 Tiny Desk Concert winner plays whimsical and haunting violin lines, looping them while she sings both hopeful and somber lyrics over top. As she sings, Lea holds the violin in an original way—upright, like a cello—to accommodate her small frame.

On April 12, she taught two of her songs to Rock River middle and high schoolers for a joint performance in southeastern Wyoming. She coached the guitar players through the chords and taught lyrics to the rest of the class: “Bird, why do you sing? Fate has clipped your wings.”

The seed for the concert was planted last fall when the Rock River students listened to Lea’s music in class. Their music teacher Meghan Goodner encouraged them to reach out to Lea.

“I remember saying that she inspired me to do—a girl can do anything a boy can do. That her music was amazing and I wish I, like, had the ideas to make the music,” said Bailey Dennett, a seventh-grade guitar player who wrote Lea a letter.

Dennett’s and her classmates’ letters were delivered by teacher Goodner to Lea at one of her concerts in Fort Collins, Colorado. When Lea took questions from the audience, Goodner put one forth.

“My question was, what advice do you have for young musicians at you know, the middle school point in their journey? And I videotaped her response and showed it to them the next day and that’s the closest I thought I would ever get to her. And they thought that was pretty great too,” Goodner said.

After the show, Gaelynn Lea read the letters.

“I was like, ‘What?’ Like sometimes you’ll play at a school and you’ll get a thank you letter after. But this was very different because I was like, ‘Boy I haven’t even met these people.’  So I was like, ‘I really really want to go to their school,” Lea said.

When the students learned Lea wanted to come to Rock River School, they raised $750 to help get her there. In early April, their dream came true. They not only got to see Gaelynn Lea perform live; they got to join her on stage.

“It was an assignment that turned into something much bigger,” said Goodner.

For her visit, students decorated the stage in wooden pallets intertwined with Christmas lights. They painted a green banner with music notes and “Gaelynn Lea” in neat black letters to hang as the backdrop.

As the rehearsal began, the students sat quiet and still in a circle. Goodner said it’s because she told them to behave, but it seemed that some, like Bailey Dennett, really were a little star-struck.

“Yeah, I never really thought that she would actually come. I mean, I knew there was a possibility but I never thought she would really come and be in this school right now. It’s really cool,” she said.

When it was time for the concert, Lea began with a question.

“So, how many of you know how you normally play a violin?”

In the front row, a student explained that you rest it on your chin and hold your arm straight out. Then Lea told them why she doesn’t play that way.

“I was born with a physical disability called Brittle Bones Disease. So before I was born, my legs and my arms broke, and then healed already to be kind of bent,” Lea said.

Lea has never walked. She said growing up with an electric wheelchair not only allowed her to destroy doors and run over peoples’ toes, but it also gave her the mobility to pursue the things she wanted to do, like music.

“So I can’t play the violin the regular way, but I can play it up and down like a cello. So that’s what I started doing,” she said. “I adapted it with the help of my teacher and I’m really grateful that she was willing to experiment with me. And so when we all have dreams, or when our friends have dreams, it’s important not to say that it’s not possible, but instead to help them figure out a way to do it, right?”

Lea taught the audience the call-and-response parts to her songs, and performed with the middle and high schoolers. Then the students asked her all kinds of questions.

“How long have you had your violin?”

“Does anybody else in your family play an instrument?”

“Did you want to be anything else before you became a musician?”

“You know what? I didn’t think I would be a musician for a living,” said Lea. “Something else that I care a lot about, which I didn’t talk a ton about, is disability rights. People with disabilities—the society isn’t totally set up for us yet.”

Lea said music ended up being her path, but that she’s glad it’s allowed her to talk about her other passions.

“And I can go to schools and talk about disability rights and how we can be a part of the solution. So I feel like I’m still able to, like, connect with that.”

Goodner wanted her students to connect with that, too.

“So I think that holistic character education for them is—is just part of learning to be a person and walking around in the world and knowing there are all different kinds of people,” said Goodner.

“I think music is a really good way to process life. You know you can always compare yourself but in reality, you don’t have to be the best. You just have, like, to do the best you can do. And a lot of times that--people will connect with it if it’s authentic,” said Lea.

For Bailey Dennett, the seventh-grade guitar player, that seemed to be the case. 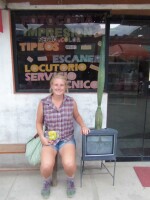 Tressa Versteeg
Tressa Versteeg is a recent graduate of the Salt Institute for Documentary Studies and is a budding freelance radio storyteller. She grew up mostly in Iowa but has lived all over what many would refer to as the middle of nowhere, but which she knows as the center of everything beautiful--most recently being an island in Maine. She is thrilled to be back where the buffalo roam.
See stories by Tressa Versteeg
Newsletters
Get the top stories in local and regional news, podcast updates, and much more straight to your inbox.
SIGN UP
Latest Stories
Related Content