Faced with more than a $1 billion budget deficit Gov. Mark Gordon announced on Wednesday his plan for a 10 percent cut to various state agencies, boards and commissions. With the Wyoming Department of Family Services included in these reductions, the juvenile justice system in Wyoming will have to adapt.

Of the $250 million in cuts that agencies are facing, the Department of Family Services (DFS) will see a $13 million reduction in its budget, resulting in approximately a 4 percent cut. Albany County Attorney Peggy Trent said this will certainly impact youth in the juvenile justice system - and she didn't learn about the cuts until she was forwarded an email from DFS on Wednesday afternoon.

"I am beyond stunned that people would just do it this way without talking to us," said Trent. "Not once did someone pick up the phone to discuss what would be cut from each individual department."

Trent is particularly concerned that as a result of state budget reductions, DFS is eliminating the Community Juvenile Service Boards. "This is probably the best piece of legislation I have seen that came out of the State of Wyoming for children and local communities," said Trent. "And they cut the funding to that programming."

The county-based boards focus on providing prevention and diversion programs to reduce juvenile incarceration. Trent said she's concerned that without funding for the boards that communities will struggle to support at-risk youth.

The cuts will also impact facilities like the Wyoming Girls' and Boys' Schools, which house and treat juvenile delinquents. Together, the two facilities will lose five positions, more than a fourth of the total positions lost in the Department of Family Services. Combined, the two schools will also sustain an almost $500,000 budget decrease originally allotted for supportive services which include food, utilities, and supplies.

Chris Jones, the Superintendent of the Wyoming Girls' School, was ready for the change. In contrast to the Albany County Attorney Trent's circumstances, Jones said she's been able to assist in guiding decisions for where cuts will be made.

"It's been a very interactive process with the entire agency really looking at what proposed cuts might be and how that will affect operations," said Jones. "We were aware, in June, of what those proposals would be. We were planning on it for a number of weeks."

Jones said the Girls' School is prepared to continue operations as normal. "In looking at being frugal, it's providing similar services - just doing it in a different way. So we're looking at ways to provide similar services so that the girls don't really feel the impact." 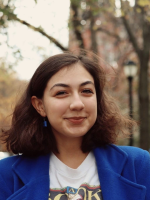 Eda Uzunlar
Originally from South Dakota, Eda Uzunlar is a junior at Yale University majoring in Global Affairs and studying as an Education Studies Scholar. Her focuses are education equality in conflict zones, education as diplomacy, and radio and education journalism. At Yale, she is the Station Manager and Vice President of the Yale Broadcasting Company (WYBC) as well as the Vice President of the Yale International Relations Association. When not attached to her computer doing work for the above, she enjoys working at her local greenhouse and helping her friends with their own audio adventures. She is incredibly excited to be working at Wyoming Public Radio!
See stories by Eda Uzunlar
Latest Stories
Newsletters
Get the top stories in local and regional news, podcast updates, and much more straight to your inbox.
SIGN UP
Related Content