Dick Sedar grew up in Casper, in a working-class neighborhood called “the Sandbar.” His parents emigrated from Croatia in the early 1920’s to seek work in the coal and oil industries. Dick was one of 16 children and tells the story of his childhood in Casper.

One of Dick’s Sedar’s brothers, Mike, worked in the Douglas Prisoner of War camp during World War II.  Dick remembers his brother’s experience working with the prisoners, and the lasting friendships he made. 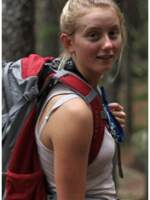 Cordelia Zars
Cordelia Zars is excited to be a new volunteer for Wyoming Public Radio this winter; she is currently taking a year off of college and is exploring opportunities in the world of public media.
See stories by Cordelia Zars
Newsletters
Get the top stories in local and regional news, podcast updates, and much more straight to your inbox.
SIGN UP
Latest Stories
Related Content