The Northern Arapaho and Eastern Shoshone Tribes recently held a conference to empower their community to stand up against drugs and alcohol. On November 2, a war staff was passed to the Wyoming tribes of the Wind River Reservation by the Crow Tribe of Montana. The tribes believe with prayer and the creation of the war staff, paired with an event such as a conference, they can help address addiction, safety, and community healing.

“Think about it in a different perspective,” she said, “because we know that what we are dealing with is not just a substance, it is actually an entity itself and we have to treat it like that.”

The War Staff Symposium attracted a large crowd, many of them young people. Goggles said the average onset of substance use on the reservation is nine years old and that early exposure to drugs may be one reason why the life expectancy of tribal members is only 51 years of age.

The Northern Arapaho and Eastern Shoshone Housing Authorities on the Wind River Reservation attended the conference and discussed ways to fight drugs and alcohol within their housing units.

Francis Blackburn, an Investigator for the Eastern Shoshone Department of Family Services, also works for the Northern Arapaho Housing Authority as a patrol officer. She said sometimes homes are no longer habitable because of methamphetamine use.

“I do know that it happens and when it does happen you see a lot of our units boarded up in our housing projects for the majority of them, that is the reason, because of meth.”

She said, testing positive for meth can result in a family receiving a 24-hour eviction notice. Testing has started with the Eastern Shoshone Housing Authority where hazmat training has allowed them to become certified to test housing units to uncover meth use. But the cost for the agency is high, from $8 to $10 thousand to clean each unit. Robert Friday is one of the certified hazmat meth testers for the Eastern Shoshone Tribe.

“We’re more worried about air quality within our units so that way the next person that is drug free and been drug free their whole life can move into a house that hasn’t has meth smoked in it.”

A lack of housing is a real problem for tribes, nation-wide, leading to overcrowding and homelessness. A recent study found that tribes were in need of 68,000 more new homes, nationally. 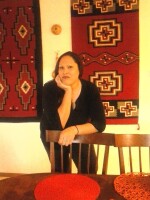 Darrah J. Perez
Darrah J. Perez is a freelance contributor to WPR and is a published native spiritual author. Her tribal affiliation is Blackfeet, Northern Arapaho and Eastern Shoshone. She's also a reporter for Pitchengine and County 10 news. She lives in Ethete on the Wind River Reservation.
See stories by Darrah J. Perez
Newsletters
Get the top stories in local and regional news, podcast updates, and much more straight to your inbox.
SIGN UP
Latest Stories
Related Content