"Wyoming Is Dying For Activists Right Now And I'm Not There"

June is Pride Month. So this first installation of the "Belonging" series is a conversation between Connor Sears and Jesse Archambeau. They're both 2018 Cheyenne East High School grads who left for college in Peoria, Illinois where a more prominent LGBTQ community has helped them to foster their own identities. Now, they struggle with the reality that their absences perpetuate a trend that leaves Wyoming's queer youth without the mentorship they themselves yearned for.

Jesse Archambeau: Tell me about a time where you felt like you did have a sense of belonging in Wyoming?

Connor Sears: That's the tricky part. There were moments where I did feel defended.

One specific memory I can recall is sitting in my sophomore year Spanish class. I had Ms. Karen Pope, may she rest in peace. I had been sat next to a kid who was very comfortably homophobic, very unapologetically homophobic.

And I know I remember it was like the little instances that made it the worse. If I touched a pencil. He would throw it away. You know it was like the little things. It wasn't him ever like writing the "F word" all over my assignments. It was the little things, but nevertheless, there was one day where she kept me back and she said. "Hey, what's up? What's gone on. Because I notice you feel uncomfortable and I just want to know you know like how can I help you. What's up?"

And I remember telling her everything, spilled it all out there and the first thing she said was, "In this room that will never happen again."

And it was that moment that I felt like there was someone who was ready to go to bat for me. It's those little moments that are what matter.

Did you ever have a moment?

JA: I remember when I came out to my mom for the first time she was really accepting of it. But we got into this fight about whether or not I should be out essentially. And I wanted to tell people. I wanted to tell my friends. I wanted to tell my teachers and be out and proud where my gay stuff everywhere and my mom was against that. She didn't want that to happen and I wasn't really understanding why and that was the first time I ever heard of Matthew Shepard. And she told me basically like there was this awful hate crime that happened very close to here and I don't want that to happen to you. And that was when I kind of when I realized like, I have a lot that I need to do and I don't really know if Wyoming is the best place for that to flourish.

CS: Yeah I'm actually really glad you bring that up because my mom is very very much the same way. You know I think I wondered for a really long time if it was: Are you ashamed of it or are you worried for me? And now I've come to the conclusion that they were just worried especially because of Matthew Shepard.

JA: Have you ever second-guessed your choice to leave Wyoming and what stopped you from coming back?

CS: Yes. I actually think about it a lot. And I think I've thought about a lot more recently than I did initially. At the beginning of the year after leaving Wyoming at the beginning of last fall, I think I was swept up in the change that I didn't really notice it, but hearing about the incident at McCormick Junior High School kind of made me sit back and think: Wyoming is dying for activists right now and I'm not there. And I think I felt guilty going to a state that is fairly progressive and does have a lot of policies that celebrate queer identities and protect queer identities. Yeah, I do reflect on that a little bit. And even to this day sometimes I think that while I am happy with my choice I could be doing a lot of awesome activist things here.

Jesse: A lot of my friends are still in Wyoming and in Peoria [Illinois] I remember there was a moment where I just felt really alone.

I was still growing into my spot in college and finding new people to be around and I was completely separated from everybody that I used to know.

And I thought I should go back.

And I think what kept me in Peoria was ever since probably about middle school I've been exploring gender identity. That was always a kind of journey that I went on by myself that I never really got to ask someone about. I remember being in elementary school and like Googling "Am I gay?" on Google. And it would have been very nice to have a person tell me, "if you're Googling if you're gay on Google you're properly gay." So being in Peoria I was with a lot of friends and they were talking about someone and I remember them using they/them pronouns just flawlessly. They were respecting that person's gender identity and that was something that was just very eye-opening for me in the fact of there is so much that I need to see. There is so much that I need to experience so that way I can become this person for other people. I can become the girl who takes the freshman by the shoulder and says, "You don't need to apologize for existing."

CS: Yeah. Similarly I would say that the way I've started to view it or try to view it is that leaving Wyoming I was a little baby activist and then right now I'm at a point in my life where I am trying to become as unapologetic, as powerful, as intelligent, as well versed, as well read as I possibly can so that, you know after my four years or after my five or eight or however many years, I can come back and I can say confidently we need social change. 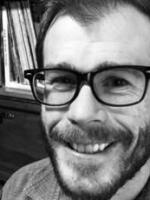