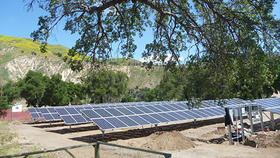 President Obama issued an order in 2015 that said federal agencies should reduce their emissions by 40 percent in 10 years. It also mandated a reduction in energy and water use in federal buildings. As a result, many agencies took steps toward conservation and clean energy — like installing solar panels on Forest Service buildings.

Trump wants government agencies to focus on cost and efficiency instead of meeting specific environmental targets.

"They’re buzz words. I mean who is against efficiency, right?" says John Freemuth, professor of public policy at Boise State University. "I wouldn’t expect too many of these agencies to do anything regarding impacts on climate, given the policy directions we’ve seen elsewhere in this administration."

The Trump Administration has also cut research to monitor climate change and reversed other green policies like standards to reduce vehicle emissions citing those standards as too high.

Coastal communities across the country are suing oil companies for contributing to climate change. Now, a lawsuit in the landlocked interior joins the list.

At the heart of the lawsuit is this realization: Climate change is expensive. Just look at worsening wildfires and floods nationally.

If you’re sneezing a bit more this year, well you’re in good company. At least 50 million Americans suffer from allergies every year. But that number is climbing, and it may be related to climate change.

Democrats on Capitol Hill are calling for an investigation into the National Park Service, pointing to a report they say follows a "pattern" of censoring scientists who study climate change. So I checked in with the scientist who wrote the latest report and is now worried about her future.

The dry and arid climate of the Western U.S. is marching eastward, thanks to climate change.

That’s the conclusion of a set of studies from Columbia University’s Lamont-Doherty Earth Institute.

A paper published by a former University of Wyoming graduate student shows recent temperatures across Europe and North America are at unprecedented highs. The report, titled "Reconciling Divergent Trends and Millennial Variations in Holocene Temperatures” looked at climate patterns over the past 11,000 years.