Trauma Piles On For Refugees In The Wake Of Boise Stabbings, Family Separation

Fatimah Abbood’s wedding was supposed to happen on July 1. She and her family had everything ready the night before—lace and flowers on the tables, her dresses were laid out, trays and trays of baklava were at the ready.

But that evening, a disgruntled, transient man went on a stabbing rampage at an apartment complex in Boise.

A three-year-old girl was killed. Eight others were sent to the hospital. Abbood was devastated.

"The woman that got stabbed in her neck was our neighbor for like four years," she says.

Some of the victims had been invited to the wedding, and like many in Boise's Iraqi community, Abbood and her fiancé Alwaleed Abdullah were upset and hurting. They decided to postpone the ceremony.

"We shouldn’t celebrate while they’re in the hospital, suffering," says Abdullah.

Hundreds of thousands of refugees live in the Mountain West. They fled their home countries to escape violence, civil war and often, a constant sense of fear. But for some, the U.S. has not been the haven of security they expected. And new violence or stressors can have a devastating effect on the already vulnerable community.

Both Abbood and Abdullah fled Iraq a few years ago. Back then, there was regular bombing and violence on the streets. Abdullah's aunt was murdered by militants and left in the street. His father's car was once attacked while he was en route to work. And Abbood’s father was almost kidnapped, twice. 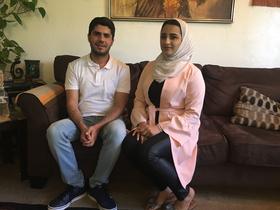 "We left all the people that we know," says Abbood’s mother Ghadah Abdullah. "Back then, every day I was was expecting bad news. It could be that our brother got killed, or your sister kidnapped."

Many refugees have similar stories. So when violence happens in their new communities here in the U.S., it’s retraumatizing, says April Masarik, assistant professor of psychological science at Boise State University.

"You get to your place of refuge only to find out that you may not be safe," says Masarik.

Take the current crisis at the border, where many families have been separated.

"The parents and their children are fleeing from an unsafe situation, a traumatic situation," says Masarik. "And then for young children who rely on adults to care for them are separated from them--it basically removes a lifeline."

People react differently to stress, so Masarik is careful not to make generalizations about refugees or immigrants.

"I feel all my muscles, all my body is hurting," says Iraqi refugee Nidaa Jasim. For her, the stabbing in Boise was a trigger for past trauma.

"For days, it continues with me ... until I’m over it. I think I am not over it. It is in the back of my head. It comes back when there is something [that] triggers it."

She gets flashbacks of the horror she fled from in Iraq. Car bombs behind you as you drive to work. Neighbors who disappear without a trace. Murders on the street, right in front of you.

"It brings something bad from the memory. People killing like this. This is the way," says Jasim. "Is this happening here now?"

Boise police have said that there’s no evidence that the suspect was specifically targeting refugees. Jasim knows that, but there’s still this question that haunts her.

"This is one guy he has problems ... and he starts killing people left and right," says Jasim. "But in my head, I am like, 'But why all of them refugees?'"

"It’s a single action from a single person," says Abdullah.

Abdullah is still looking forward to his future here, including his marriage to Fatimah. Their wedding is now planned for November later this year.

"For me, Boise stays like, a very safe and peaceful city."

Farmworkers Feed Us. How Do We Support Their Kids?

Angel, a tall, lanky 14-year-old, dribbles down the basketball court of the school gymnasium in Manvel, North Dakota. Realizing he’s unmarked he goes for the three-pointer. It’s a nice arching shot, but the ball bounces tenuously on the rim and doesn’t go in.

A coalition to stop the construction of a privately-run immigrant detention center in Evanston is organizing events across the state called Fiestas de Familias. These parties celebrate kinship while drawing attention to policies that organizers say separate families. The effort is led by WyoSayNo and the American Civil Liberties Union of Wyoming.