Still No Nominees For Park Service, BLM, A Year And A Half Into Trump's Presidency

including the National Park Service, Bureau of Land Management and U.S. Fish and Wildlife Service. Former land managers say the lack of leadership has grave consequences for the future of public lands.

After a recent fresh rain, Tim Murphy leads me on a hike in the foothills outside of Boise. The dirt trail is damp and the scent of sagebrush is strong.

Murphy was in charge of this kind of rangeland habitat before he retired last year as the head of Idaho’s Bureau of Land Management. Murphy rubs some sage leaves between his fingers and takes a whiff.

“It smells like renewal, like the world is clean,” says Murphy. “If that doesn’t bring you back to earth, smelling that, what could possibly?”

Murphy says the current lack of leadership at the BLM is a big problem for long-term projects, such as  a multi-year sage grouse research project that was nearly cancelled. In prior years, the project was approved at the BLM state level.

But with no director at the helm, the paperwork had to go all the way up to the high levels of the Interior Department, and it took months and months. That’s kind of like a CEO having to review an order for new pens. A BLM director could have pushed for funding approval.

“These aren’t decisions that are ground-breaking. Like the fourth year of continued research to get good science,” says Murphy. “We almost lost the partnership. That is just one example.” 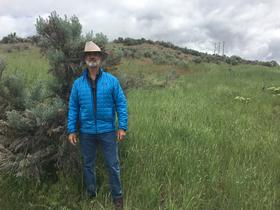 There are many more examples of delays in funding and hiring at land management agencies across the west. When a big government agency has no leader, it’s like any large organization without a captain.

"The agency as a whole is sort of adrift,” says Jon Jarvis, former National Park Service Director under President Obama. “It has no vision, no direction without a director.”

In addition to the Park Service and the BLM, the U.S. Fish and Wildlife Service and dozens of federal agencies still lack directors. These leaders are supposed to be nominated by the Department of Interior and must be confirmed by the Senate. When there’s no director in place, Jarvis says interim directors call the shots.

The Trump Administration has nearly 200 vacant appointee positions that still have no nominee before the Senate, according to the nonprofit and nonpartisan Partnership for Public Service. That’s unusual at this point in a presidency.

Interior Secretary Ryan Zinke has alluded to the process being out of his hands. He expressed frustration at the molasses pace of the confirmation process at a Senate budget hearing last month.

Zinke’s spokeswoman did not respond to questions about the long timeline.

Murphy says, for employees on the ground maintaining trails or working with ranchers, not having a leader isn’t a big deal.

“Employees have tiller in water, the rudder in the water and they’re moving the BLM forward,” says Murphy.

But the resulting delays and inefficiencies contradict Zinke’s message that he wants more local say in public lands matters.

“It is a head-scratcher that time and time again there are ongoing briefings that take hundreds of hours over time, to get to the same place that a local manager would have gotten to,” Murphy says.

So your Yellowstone vacation won’t necessarily be affected by the absence of a Park Service Director. But it’s possible those delays and inefficiencies could affect the long-term planning and future of the park.

A 3,500-well natural gas project has taken a step forward. The Bureau of Land Management published the final Environmental Impact Statement (EIS) for Jonah Energy's Normally Pressured Lance project in western Wyoming. The project would be on located over 140,000 acres.

More Changes In BLM Leadership, But Still No Director

In another shuffle of department leadership, the Bureau of Land Management has a new Deputy Director of Operations. The agency, along with the National Park Service and the U.S. Fish and Wildlife Service, still await Senate-confirmed directors.

Voices continue to mount against the Trump administration's plan to lease land for oil drilling near the Great Sand Dunes National Park and Preserve in Colorado. The Bureau of Land Management plans to lease more than 20,000 acres of land starting in early September, some of which comes within a mile of the park.

The Society for American Archeology canceled a panel this spring because the Bureau of Land Management wouldn’t pay for its staffers to attend and lead a symposium on Land Management issues.

The Bureau of Land Management has presented Congress with a controversial new plan to manage wild horses.