Some River Rafting Companies Are Going With The Low-Flow

Colorado is called “the mother of  rivers” for a reason: it’s one of the most popular states for river rafting in the country.  But like the rest of our region, unprecedented growth, a changing climate, drought, and wildfires are taking their toll on this multi-million-dollar industry.

Jordan Poythress is at the banks of the Arkansas River near Cañon City, Colorado on a sunny afternoon helping a few customers shake their nerves before a run down the river’s rapids.

Poythress has been a river rafting guide for almost a decade. But he still has to prepare himself for the particular challenges of running down a river with low water.

“As the water comes down,” he said, “we have more obstacles to avoid, more rocks more moves to be made. It is much harder for us.”

Poythress loves his job, but he says when there’s less water in the river it’s not only rougher on the guides’ bodies, it also hurts their paychecks.

Guides get paid by the trip, not by the hour.  “So when the water goes down,” Poythress said, “our hourly goes way down. We’re working harder for the people out here.”

Right now he says the river is running at about a third of the volume it was at this time last year.

Tony Keenan in Poythress' boss and an owner of Whitewater Adventure Outfitters. He's been in the rafting business since the 80s, and he said there are always ups and downs. This year, he said, hasn't been the best.

"2016 was solid, 2017 was solid—poof! This year snowpack numbers were significantly less," said Keenan. "I mean anybody that went skiing this year saw for themselves that snowpack was pretty thin, particularly in certain parts of the state." 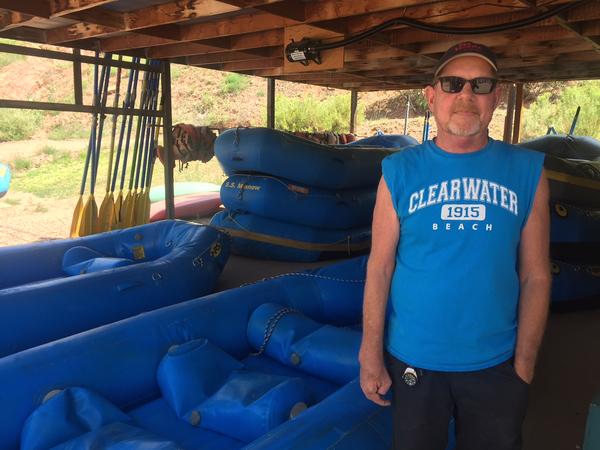 But it hasn’t been the worst year either, at least for the Arkansas River. Keenan said it’s been manageable, mainly because of water releases they get from reservoirs upstream.

It’s part of an agreement called the Upper Arkansas Voluntary Flow Management program between rafting outfitters, fish and wildlife conservationists, state parks, and water agencies. The deal aims to keep optimal flow in the river for various uses, including recreation.

The agreement is voluntary, so Keenan and his competitors are not guaranteed anything, but he said everyone knows the rafting business brings in tourism dollars for the whole region. He said Colorado Springs Utilities, for example, knows that people visit the area for outdoor recreation, like hiking, climbing, and rafting, so it behooves them to release enough water to make the river runnable. 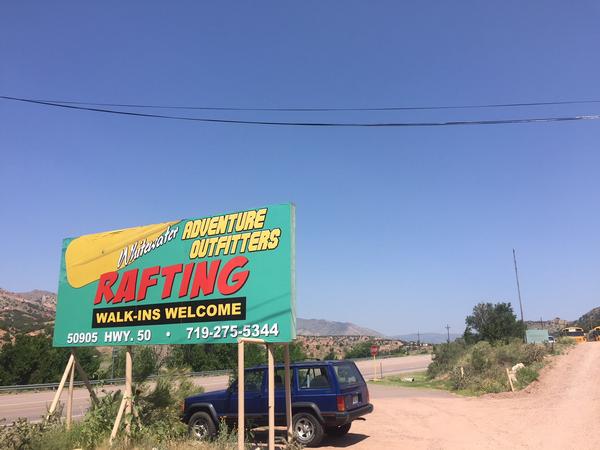 “It's good for them as well as us,” Keenan said.

Outfitters on some of Colorado’s other rivers, like Alex Mickel, have not been so lucky. Mickel is the president of Mild to Wild Rafting and Jeep Trail Tours in Durango, Colorado.

As of very recently, the comapny is no longer offering raft trips down their local river - the Animas. The water levels have just gotten too low.

Unlike the Arkansas, the Animas is a free-flowing river. There are no reservoirs upstream of Durango to release extra water from, so Mickel doesn’t have that kind of insurance policy.

Mickel said they actually had enough water for most of the summer, "because even at low water,” he said, “the river can be a ton of fun. There's lots of maneuvering, there's fun drops. It’s a great time.”

But the massive wildfire near Durango this summer squelched the area’s tourism. Mickel was hopeful they could rebound after that, “but, well, that was really curtailed from the lack of flow that we ran into last week,” Mickel said.

He said if it rains more in the alpine areas near the Animas headwaters they may be able to start taking raft groups out again through October, but they will already have missed peak season.

So, he said, “it’s gonna be a little more beans and rice this winter than normal.”

It’s an uncertain time as continued population growth and a changing climate put stress on Colorado’s streams and rivers. Rafting outfitters will have to keep going with the flow -- even if that could mean no flow at all.

Low water levels on the Colorado River could force water shortages in Arizona, Nevada and Mexico in 2020, according to a new forecast from the U.S. Bureau of Reclamation.

A shortage on the river is tied to the level of its main reservoir, Lake Mead near Las Vegas, Nevada. If the lake drops past an elevation of 1,075 feet, water users downstream have to start cutting back how much water they use. The U.S. Bureau of Reclamation projects the lake to drop below that level next year, triggering water cutbacks in 2020.

A couple days later, the Howe Ridge fire blew up.

Lodgers and campers awoke late Sunday night to officials telling them to get out as soon as possible.

A federal court is ordering the Bureau of Land Management (BLM) to reanalyze environmental and climate impacts of coal and oil and gas leasing in two field offices by fall of 2019.

Air Pollution Down In US Except For Wildfire Regions

A new study shows air pollution like soot, dust and smoke is down around the country with one exception: wildfire prone areas like the Mountain West.