Utah Gov. Gary Herbert declared a state-wide drought emergency this week. It’s one of two states in our region that were especially hard-hit this year. 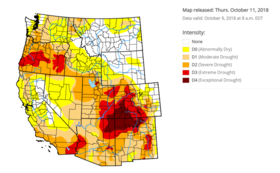 Peter Goble is a drought specialist with Colorado State University. He said the droughts affecting Utah and Colorado come down to two things.

“That one-two punch of at or near record low snowpack in western Colorado and eastern Utah followed up by the hot and dry summer has made the 2018 drought historic,” Goble said.

It was Utah’s driest year on record and Colorado’s second since records were collected in the late 1800s.

For both states that meant below average reservoirs and an intense summer fire season. Some ranchers even had to sell off cattle and lamb herds because of a lack of grazing material to feed them.

Goble said while seasons vary from year to year, climate change is playing a part over the long term.

If the warming trend keeps up it will continue to increase evaporation, he said, and it will be felt more in a dry year like this one.

With rising global temperatures, glaciers are shrinking. Garrett Fisher is a pilot and photographer, and he recently set out to capture all of the glaciers in the Rocky Mountains while flying his plane, a two-seater built in 1949. His new book Glaciers of the Rockies is the result of the effort, and he told Wyoming Public Radio’s Caroline Ballard that there is something different about seeing the world from above.

Scientists know very little about a species of stonefly that can only be found in the alpine streams of the Grand Teton Mountain Range: the Lednia tetonica.

Areas all across the Mountain West, from Colorado's Front Range to Eastern Idaho, have seen their first real snowfall of the 2018-2019 season in the last week.

A new report from the United Nations says mankind must act fast to slow global warming, a message that is particularly urgent in Utah and throughout a scorched Mountain West that saw a devastating fire season and patches of severe drought.