The Great Salt Lake is vast — around 1,700 square miles of state and federal public lands.

This inland sea is too salty to be a big fishing attraction. But it draws lots of visitors each year — over 10 million migratory birds.

A team of biologists from the Great Salt Lake Ecosystem Program arrived one recent morning to count the birds. It’s a big job, so they needed a plan.

“I think I had egrets last time, so I can do those — and pelicans,” said Jessica Swift, a wildlife technician who starting counting birds this year.

They divvied up species they expect to see.

The Great Salt Lake is shallow — not quite three dozen feet at its deepest. There’s just a glaze of water on the mud on its 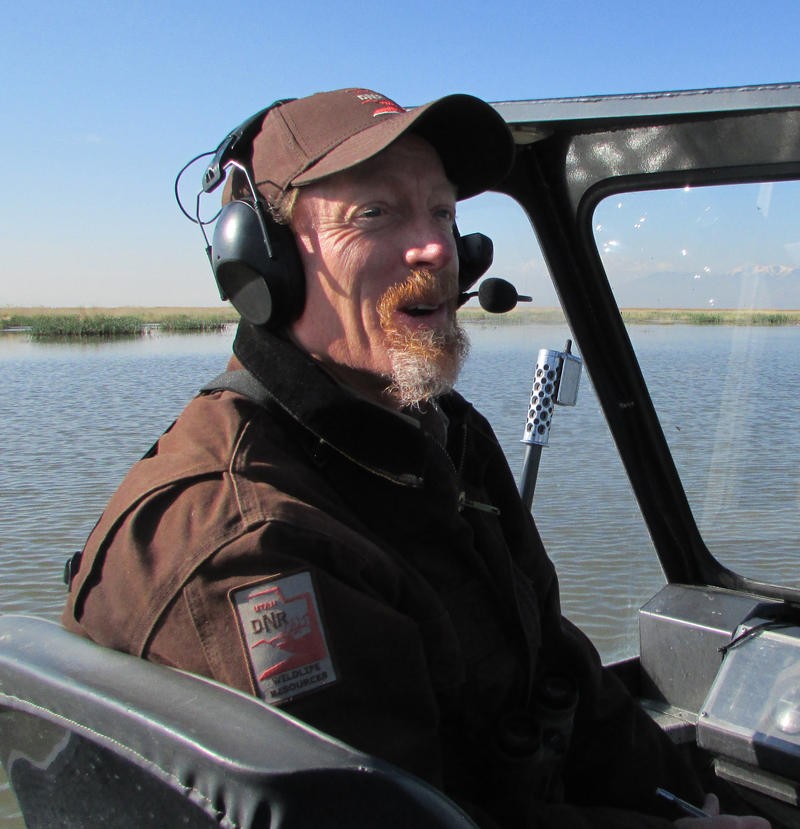 eastern edge. The wetlands here form a grassy fringe where birds feed and nest. The best way to move across the shallows is by airboat, so the team climbed aboard before speeding off.

John Neill, an avian biologist who led the day’s bird count, is a walking Audubon guide. He began rattling off birds he expected to see, beginning with shorebirds.

“Long-billed dowichers, browner ones with fairly long bills. You’ll see lots of American avocets here today. A lot of the ducks flew off, but we have a lot of northern shovelers, gadwalls, cinnamon teal, American green-winged teal.”

It was a chilly morning in Utah’s official Month of the Bird, otherwise known as May. Members of the bird-counting team stood up in the airboat to scan the horizon. Sometimes they squinted into binoculars then scribbled down their tallies.

Other people might find bird counting tedious, but not Swift.

“For me, when I get to see a rare bird that I don’t get to see very often, it’s like seeing someone famous,” she said. “You get soooo excited because you don’t get to see them very often. And, when you get that opportunity, it just blows your mind. It’s really exciting.”

Bailey nodded in agreement, and recalled a few weeks earlier.

“I got to see a pair of Clark’s grebes do one of their mating rituals, where they mimic each other and they dance,” she said. “And then, at a certain point, they’ll get up on their feet and they’ll run across the water. And not a lot of people get to see that. And, oh my gosh, I just went crazy. I was sooo excited. I was over-joyous. I was ... overwhelmed with excitement. And it was a very amazing experience for me.”

“I’m always interested in seeing what’s there,” he said. “There’s always something new — like the blue-winged teal could pop up.”

But they weren’t just gawking. Bird counts help measure the health of the entire Great Salt Lake ecosystem in the face of pollution, climate change and water diversions.

And many of these birds feed on artemia, better known as brine shrimp. Brine shrimp eggs, dried and sold mostly for fish food, amount to a $50 million industry.

“That’s one of the reasons we do most of these surveys,” he said, “is to track the trends and the populations and the different use of the birds throughout the different areas of the lake and under different lake conditions. And that way we can kind of track if there is some potential problem.”

The counting team watched a coyote skulking across Antelope Island’s shore. They kept counting, with eyes on some gray-colored dots on the horizon. Bailey had them pegged.

“A black-bellied plover out here in front of us,” she said. 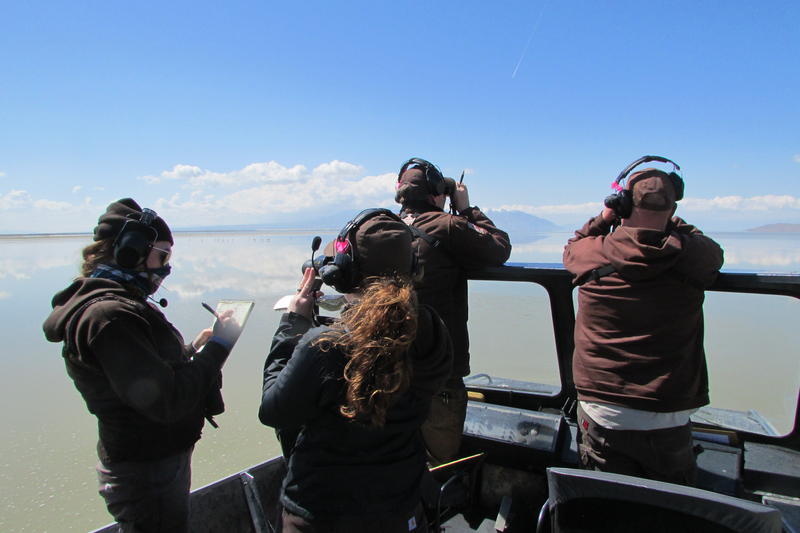 Black-bellied plovers are black and white shorebirds that travel the Pacific Flyway. They are bigger than robins but smaller than crows.

A short time later, the binoculars were trained on some specks along the southwestern horizon. It looked like a spoonful of coffee grounds spilled on a kitchen floor.

Neill and Stone quickly assembled a scope to get a better look. They counted 1200 black-bellied plovers, far more than the 200 Neill said he usually sees.

The day’s tally later came in at a modest 17,300 birds. It seemed like there must have been a million.

The Cornell Lab of Ornithology offers a trove of information in its All About Birds. It has additional information about the blue-winged teal.

6:30 a.m. is one of the best times to watch wildlife in Yellowstone National Park’s Lamar Valley.

Everything smells like sage. It’s really cold and there are a bunch of retirees staring through hire-powered telescopes at a lush, verdant hill.

Where Have All The Western Bumblebees Gone? One Entomologist Goes Searching

Over the next few weeks, we're going to take you on a tour of some of our favorite public lands.

But entomologist Christy Bell comes for the bees.

An anonymous donor plans to give a historic acre of land surrounded by Grand Teton National Park to the park.

Public lands facilities around the nation are cutting budgets and staff. But in the Mountain West region, cutbacks at Montana's National Bison Refuge are prompting accusations of a political vendetta by regional U.S. Fish and Wildlife Service managers.

A lot of people may not have heard of the Land and Water Conservation Fund, or that it’s in jeopardy.