Legal Pot Changes The Work Of Some Drug Detection Dogs

The new legal marijuana industry is generating billions of dollars and creating thousands of jobs, but it's also creating instability, restructuring and some layoffs for one group of workers - drug detection dogs.

Pueblo Police Department's K-9 Detective Widget, a five-year-old Belgian Malinois, has helped make millions of dollars in drug busts during her four years on the force, but now she has a new partner, Sage a two-year-old golden lab.

The two dogs' human handler Detective Vince Petkosek said, like Widget, Sage is trained to find heroin, cocaine, methamphetamine, Ecstasy and psilocybin mushrooms. Unlike Widget, she is not trained on marijuana. 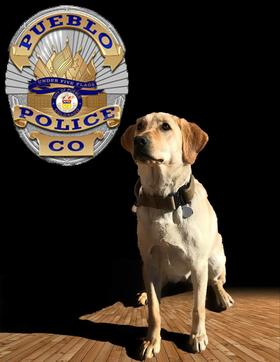 That's important because dogs like Widget react the same way whether they ferret out legal marijuana or an illegal drug like meth. Petkosek said that means Widget's searches could be questioned.

"The courts are saying it's legal marijuana," Petkosek said, "So how can you say the dog is alerting on something illegal, when she's trained on a legal product: marijuana."

A case in Colorado is putting this to the test. A truck was searched after a K-9 detected drugs. A meth pipe was found and the man was convicted on drug charges. But the Colorado Court of Appeals reversed the conviction saying it was an illegal search, because the dog could have been smelling marijuana. There wasn't actually any pot in the vehicle, but the K-9's reliability to provide probable cause for a search was still questioned. That case is now before the state's supreme court and its decision could influence what happens in the rest of the country.

As for Widget, she can't be retrained to not look for weed. So now she works only on cases where pot is still illegal, like when minors are involved or for federal investigations.

Petkosek said, "She has a great reputation. She is working with other agencies now out of Denver. DEA Strikeforce uses us. We're working with FBI and ATF when they're requested. So Widget is getting kind of famous. One of her biggest busts was a $1,600,000."

Widget's partner Sage might be new but she's already making a name for herself too.

"This summer she got her first big bust. She got about a half a million in heroin on a drug interdictions stop," Petkosek said.

On training days, Petkosek places four identical plywood boxes randomly near the police station parking lot. He hides cocaine in one of the boxes. When he lets Sage race out of her kennel, she checks all the boxes. When she sits next to one, Petkosek knows that's her alert sign that she's found the cocaine and expects to get paid for a job well done. For both dogs, their favorite reward is playing with the tennis ball that shoots out of the box with the cocaine when Petkosek pushes a remote trigger.

"It's just a big game for these dogs," he said.

In states where marijuana is legal, local governments and agencies are making different choices about how to address what's become a confusing situation. Some dogs are getting laid off. Others are getting whole new careers like search and rescue.

But Petkosek thinks the Pueblo Police Department made the right choice to purchase Sage and that the $7,000 investment was worth it.

"When I deal with drug interdictions or cartel mules and people say 'yeah I got marijuana.' and they're smiling thinking that I'm done," he said. "I'm like hey no problem, my dog's not on it. And you just see the look in their eyes they're like oh no." He said he knows he has probable cause to search when Sage alerts that she's found something, because the dog wasn't looking for pot.

Petkosek is proud of the work both K-9s do and he said, "It's great to have two partners who are always happy to see me."

Editor's Note: This story has been edited from its original publication for style.

Medical Marijuana In Utah: Regulation From Farm To Patient

Utah is poised to legalize medical marijuana this fall, and it could be the first state-run distribution program in the country.

The Church of Jesus Christ of Latter-day Saints came out in cautious support of medical marijuana last month but now says the legislature should decide how it’s legalized in Utah, not the voters in a citizen’s initiative this November.

A felony case involving hemp oil in Teton County has been dismissed. In July, a Montana woman was stopped by police officers in Teton County. Anita Maddux was charged with felony possession of CBD oil containing THC.

What's Behind The LDS Church's Opposition To Medical Marijuana?

Representatives from the Church of Jesus Christ of Latter-day Saints are becoming more active in their opposition to a medical marijuana initiative in Utah this November.