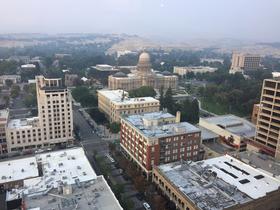 The Environmental Protection Agency just announced its plan to roll back vehicle emissions standards. That could be cause for concern in Mountain West communities with poor air quality.

A President Obama rule required all new cars have lower carbon emissions starting in 2022. The EPA wants to reverse that plan.

EPA Chief Scott Pruitt says those standards are too high. He says his agency will come up with new standards that allow manufacturers to make affordable cars while still expanding environmental safety benefits.

Boise councilwoman Elaine Clegg isn’t convinced. She says many residents in her city struggle during winter inversions that are exacerbated by car exhaust.

"So when we have these kind of air quality issues, they’re literally stranded in their homes unable to go do anything because it would hurt their health."

Clegg is also concerned that lower standards could be a detractor for new industry.

"Getting a permit to build new industrial use requires that you have to show that the airshed has enough room in it, for whatever pollutants you will be adding to it," says Clegg. "And the less room there is because of growing tailpipe emissions, the less likely it is that you'll be permitted for a new industrial use."

Municipalities and individuals will have a chance to comment on proposed standards once they're released by the EPA.

Oil and gas advocacy groups said companies are struggling to comply with newly in effect methane regulations. The Obama-era rule aims to reduce leaks and greenhouse gas emissions and has faced several roll-back attempts from the Trump Administration. But in February, a California court refused to postpone the rule, putting it back into effect.

Wyoming’s carbon dioxide emissions per person decreased 10 percent from 2005 to 2015 but the state still has the highest emissions level in the country. According to data from the Energy Information Administration (EIA), Wyoming’s CO2 emissions are seven times the national average. Emissions levels are calculated based on electricity use, transportation, and consumption for homes, businesses, or factories.

EPA Administrator Scott Pruitt said he’s putting new limits on which scientific studies can be factored into the nation’s environmental laws and policies. He told the conservative web site, The Daily Caller, last week that he wants more “transparency” in scientific research.

At the center of the dusty Pinedale-Anticline field looking over the Wind River Range, Erika Tokarz stands on Ultra Petroleum’s  Riverside 9-2 pad which is home to several wellheads. Across the road, workers in hard-hats and sunglasses crisscross the plot of land with a massive tower at its center, working to drill a hole for natural gas.

Ozone, Asthma, And The Oil And Gas Connection

Here’s a simple recipe for ozone: mix hydrocarbon and nitrogen oxide chemical compounds in the air, and add sunlight.

“The sun comes out and cooks this mixture and the outcome of that is ozone,” said Steve Brown, an atmospheric scientist at the National Oceanic and Atmospheric Administration Earth System Research Laboratory in Boulder.