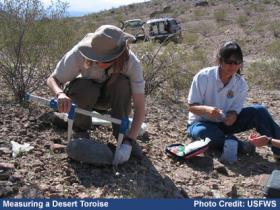 The Department of Interior just released a new science policy that it says will increase transparency. But conservationists are concerned.

The DOI order came out late Friday.  It says Interior agencies must use peer-reviewed science whenever possible when making decisions. In an emailed statement the DOI said it came about in response to quote “concerns that the Department has not been providing sufficient information to the public to explain how and why it reaches certain conclusion, or that it is cherry picking science to support pre-determined outcomes."

Listen
Listening...
/
Press PLAY for the audio version of this story

"The goal is for the Department to play with its cards face-up (so to speak), so that the American people can see how the Department is analyzing important public policy issues and be confident that it is using the best information available to inform its decisions," a department spokesperson wrote.

That sounds good, says Bobby McEnaney with the Natural Resources Defense Council, a nonprofit conservation group. But he says the problem is, it can take a long time for science to be peer-reviewed and then published. In the meantime, local land managers won’t be able to make on-the-ground in-the-moment decisions.

“Agency officials cannot use science unless it passes a gold standard,” McEnaney says.

He points to how land managers collect science data all the time to predict fire seasons, measure snowfall, or water levels in our reservoirs. “You’re talking about limiting the ability of officials to do their daily job.”

The order also applies to any private entity that receives research funding from the Interior Department.

Other conservation groups expressed concern that the new policy might force researchers to reveal confidential sourcing or geographic data, such as the location of sensitive archaeological sites. But the DOI says that information remains protected.

“This Order specifically protects information that is required to be kept confidential by law, and allows the Deputy Secretary to issue waivers when necessary,”  a DOI spokesperson wrote via email.

The new order was not well-publicized by the agency this week.

“They’re saying this policy is  as good as sliced bread. But they’re not exactly advertising it and you can’t find it on the web. You’d think they’d be more proud about it, and allowing people to hear about and evaluate this new regulation.

Holding Back Methane: State Steps Up As Federal Regulations Relax

Dave Hohl is a long-time resident of Pinedale, a town surrounded by oil and gas operations in western Wyoming. In 2008, Hohl went cross-country skiing and he noticed a heavy brown haze.

Interior Department Rolls Back Methane Rules For Oil And Gas

The Interior Department has released its final plan to rollback a rule limiting methane emissions from oil and gas producers. This follows the Environmental Protection Agency’s (EPA) move last week to weaken its own methane protections.

Land Fund Expires With No Action From Congress

An important but little-known public lands fund expired this weekend.

What Can We Learn From Beavers? Ben Goldfarb Says A Way To Solve Our Conservation Crisis

From the Gros Ventre Valley of Wyoming to a Walmart parking lot in Logan, Utah, environmental journalist Ben Goldfarb traveled to all kinds places for his new book, Eager: The Surprising, Secret Life of Beavers and Why They Matter. Goldfarb says beavers have super powers. In fact, he calls them ecological and hydrological swiss army knives. And in the right circumstances, Goldfarb says they can tackle all kinds of problems that plague the West. Wyoming Public Radio’s Maggie Mullen spoke with the author ahead of his visit to Teton County Library Wednesday, September 26 starting at 5 p.m.

Wyoming has a lot of wind energy but conservation biologists warn Wyomingites need to pay attention to how turbines can be harmful to wildlife. Biologists are figuring out ways to protect wildlife while still producing wind energy. Wyoming Public Radio’s Kamila Kudelska spoke with Holly Copeland, the director of science for the Nature Conservancy in Wyoming, on which animals are in danger.