There actually are trained physicians here who could help-- they’re refugees who have years of medical experience. But it’s a huge challenge for them to practice here. 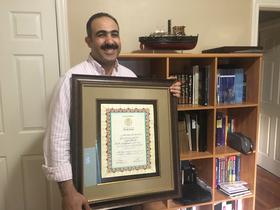 When Marwan Sweedan arrived in the U.S. from Iraq in 2008, his first job was selling hotdogs at a baseball stadium. Sweedan says the job was fun. But he was maybe a little overqualified for that gig -- he had worked as a trauma surgeon in a Ramadi hospital before fleeing Iraq as a refugee.

Sweedan now lives in Boise, Idaho, and works in the patient safety department at Saint Alphonsus Hospital. He’s an infection prevention specialist. But he wants to go back to treating patients as a physician.

“Here’s the thing: Being a doctor in the United States coming as a refugee is a little bit challenging because we are not prepared for the system,” says Sweedan.

That system requires passing three huge medical exams, and often necessitates some form of clinical work in the U.S. Then, foreign doctors must apply for a multi-year medical residency program. In Idaho, residency positions are already extremely competitive, and very few refugees make the cut.

“The program directors look at us as a lost cause kind of thing,” says Sweedan.

Even though they might have years of experience under their belts, refugee doctors lack some of the key elements of a successful residency match--a degree from a well-known medical school, letters of recommendation from U.S. doctors and clinical experience that program directors can verify.

“And probably their English is kind of challenging,” says Sweedan. “There’s no way for you to say, ‘Well I’m going to neglect the Harvard graduate and take this guy.'”

Idaho ranks almost dead last for available physicians--the state is 49th out of 50 for number of doctors per capita. There’s only one doctor for about every 600 Idaho residents. Wyoming and Utah are also extremely short on physicians. So, theoretically, refugee doctors like Sweedan, who have years of legitimate schooling following British medical training protocols, could help fill the gap. 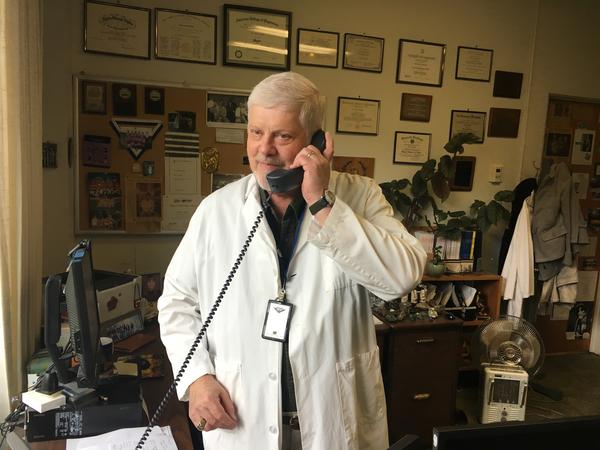 “These are people that we need to serve the communities because it is so hard to get a physician in our state,” says Doctor Scott Smith, a doctor of internal medicine with the Veterans Administration Hospital in Boise.

Smith acts as guide and mentor for refugee doctors who want to get their license or otherwise work in the medical field. He helps them with things like cover letters and interview preparation.

“The only way to practice medicine now in the United States is to start all over,” says Smith. “Surprisingly some of them want to do all that.”

Smith admits that it’s hard for refugees to compete for residencies in Idaho. Last year, the Boise VA hospital had 12 open residency positions, for which it received more than 1600 applications.

To help boost refugee doctors' chances at getting some of those positions, Marwan Sweedan formed a group through a program called Global Talent Idaho. He and other refugee doctors help connect one another to local resources and mentors. They share advice and insights about how to navigate the medical system, and they support one another at various stages in the process.

Idaho lawmakers considered a proposal in this past session that would fund more medical residencies in the state, and would raise the number of residents from 141 to 356 for the next decade. But that plan came with too high of a price tag for some lawmakers, including Idaho Governor Butch Otter. The legislature ended up funding a much smaller package that allowed for 25 new residency positions in the state. In Minnesota in 2017, the legislature approved an ambitious funding package specifically aimed at helping foreign doctors become licensed.

Financial considerations are a big concern for many refugees as they weigh whether or not to work toward licensing. Study materials for the medical exams often cost thousands of dollars. Foreign-trained doctors often need to enroll in costly programs to gain clinical experience in the U.S. to boost their resumes, or they might have to accept unpaid internships. And refugees must often pay these costs out of pocket, while still supporting their families. Most refugees are not eligible for federal loans, and few have enough U.S. credit history to obtain a private loan.

Ali Makki fled Iraq with his family back in 2006. Like many Iraqi doctors, Makki says he received threats from insurgents when he treated Iraqi law enforcement. “It was really dangerous to work as a doctor over there,” Makki says.

There was no question for Makki that he’d try to be a doctor when he got to the U.S. And he was lucky enough to get one of the rare residencies in Idaho. But it took him eight years of work and study to get that position, and that’s on top of his training in Iraq.

For Makki, all that work was worth it. He can’t imagine being anything else except a doctor. “This is what I am made to do, and I love doing it,” he says.

Makki plans on staying right here in Idaho once he’s licensed as a physician. That scenario is a long way off for Marwan Sweedan. He’s still working on passing his U.S. medical exams.

After eight hours at his hospital job and two hours of a physiology class, Sweedan logs onto his study program online on a recent evening. Each daily lesson requires watching a video, taking quizzes and then studying a booklet of patient cases. It’s not something he can do on, say, his lunch break at the hospital.

“No, you have to dedicate at minimum five hours, and when I say five hours it’s five exact hours,” says Sweedan. “Every day. Even holidays.”

Sweedan’s home office is sparse and mostly filled with study books. But one thing stands out -- it’s a slightly crumpled photo, pinned above his desk: an image of an anonymous child, emaciated, picking food off the street.

Sweedan has carried the photo with him ever since he left Iraq, as a reminder for why he’s a doctor. Along with Sweedan, the photo has been through a civil war, a refugee camp in Jordan, been flown across the ocean, and been with him this past decade in the U.S.

“When I am feeling tired or down, I look at the picture and I feel at least I have a chance. This kid doesn’t have anything,” says Sweedan. “And this just reminds me of my mission. These are the people I need to serve.”

In honor of Black History Month, we’ll hear about the highs and lows of the black experience in the Modern West.

Wyoming is home to many immigrants, migrants, and former refugees. It is the only state, however, without a refugee resettlement program. But the current political climate has immigrants questioning their place in Wyoming and the U.S.

Curriculum Changes Should Be Good For WWAMI Students

The University of Wyoming is looking to find more space for the WWAMI medical program. The program is run by the University of Washington and trains students from Wyoming, Alaska, Montana, and Idaho to be doctors.

How Electronic Medical Records Fuelled The Return Of A 3,000 Year Old Profession

Think about the word, “scribe.” What pops into your head? Probably something from a humanities class in college or a History Channel documentary, right?

Well, if you have visited a doctor lately you might be envisioning something more modern. The medical scribe industry has been booming in recent years, fuelled largely by hospitals around the country switching to electronic medical record systems.